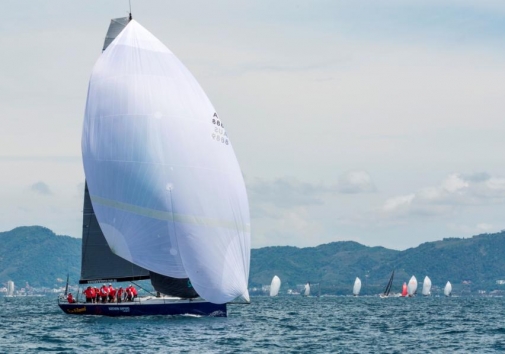 Phuket, 9 December, 2016– Day four of the Phuket King’s Cup Regatta began with a Sail-Past in honor of His Majesty King Maha Vajiralongkorn Bodindradebayavarangkun; unique to the King’s Cup, sailors respectfully appreciate the opportunity to be part of this dramatic and impressive procession. The weather is beautiful, winds are picking up well over yesterday (in the morning, at least), and the day promised to serve up a relatively solid hit of competitive sailing.

A four hour joust in IRC0 between Kevin Whitcraft’s THA72 team and rivals Team Hollywood ended with a minute and a half separating the two boats. Ray Roberts’ team were victors after a grueling run back – their first win this week. Danish entrants in IRC2, Phoenix skippered by Niels Dgenkole, won their class today on the long, slow course, with Team Judy second and the Royal Thai Navy 2 team skippered by NC Poonperm Somrak in third. CPO.1 Wiwat Poonpat and Royal Thai Navy 1 team took another strong win in Platu One Design Class and have already won their class.

Shanghai Sailing Club on a boat called Overdrive, the only Chinese team in Open Charter, won impressively today ahead of a Russian and Australian competing fleet. Light wind conditions in the afternoon made the long course selection quite slow going, with some classes being cut short in order to nail results to the board. IRC1 Class ran out for over four hours, with Team Karasu coming back on form to take the win after a tough week for them so far. Gentle breezes are no problems for the Fireflies, of course; John Newnham on Twin sharks won easily again today - no surprises, they have won every race this week.

Lt. Col. Hnoon Sansanakom, board member of the Government Lottery Office (GLO), spoke of the reasons behind the GLO’s decision to continue to support the Phuket King’s Cup Regatta as strategic partner: “The main benefit we appreciate through association with the Phuket King’s Cup Regatta is the ability to support our investment in sports in Thailand. It’s about giving back to Thai society, not deriving a profit or meeting a certain KPI. It is a policy of the GLO to support sports in Thailand, and more specifically sports education. With sailing, it’s a sport that was beloved by HM the late King Bhumibol Adulyadej. Our association with the regatta supports the GLO’s CSR objective of contributing to the wider society in Thailand, improving the health of people (especially young people) and promoting positive and worthwhile experiences for everyone through sport.”

The 2016 Phuket King’s Cup Regatta competitive classes include Keelboats and Multihulls and International Dinghy Classes. All participants, local and international sailors and organizers, joined in 89 seconds of silenceto mourn the passing of HM the late King Bhumibol Adulyadej at the opening event. 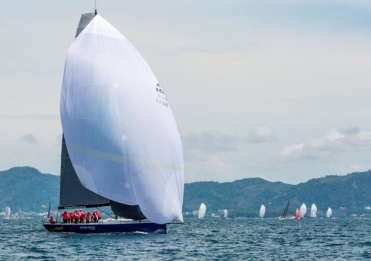