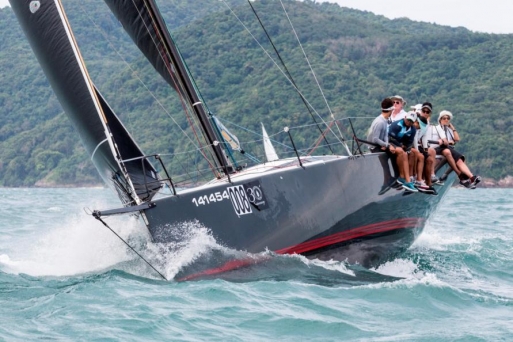 Phuket, 6 December, 2016– This year’sPhuket King’s Cup Regatta continues its respectful and competitivecamaraderie in fitting tribute to HM the late King Bhumibol Adulyadej. The beachside event series for this week offers a more reverent atmosphere, but there is a palpable sense of friendship, mutual support and an overwhelming spirit for competition, which can be felt on the water and at the other component events. It has contributed to making this year’s King’s Cup the most successful in its 30-year history. The weather is playing its own part, too; glorious sunshine, stern and dependable winds, but choppy seas making for a fast and very tough day’s sailing.

Kevin Whitcraft’s THA72 team took another double win today, winning their first race against Ray Roberts’ rival team by two clear minutes in the first race of the day (IRC0). The second run was a leeward waltz for them. In IRC1, the familiar silhouette of Mandrake III skippered by Nick Burns (representing Hong Kong) took the day’s honors with a win and a second place finish.

Nick Burns, skipper of Mandrake III, discussed the day’s racing on the water, and his IRC1 win: “Fabulous conditions. We were round the island to the top mark with strong tide against the wind and lots of chop. We are a 43 foot GTS which performs in very light or very fast conditions, we’re a bit extreme specialists in this respect! Today was very fast so we enjoyed it a lot. The first part of the day was great, surfing waves and topping out at about 17 knots (which is fast for us). Round the bottom mark, we were reaching into winds of between 17-20 knots.”

Nick’s crew of 11 consists of sailors from New Zealand, Australia, The Philippines and Hong Kong. Tomorrow should be another good day for them if conditions avoid middling. Mandrake does best in light or heavy winds, having recently had 790 kilos removed from her keel - Nick is hoping for a similar day tomorrow.

Ross Chisholm, Race Officer, explains, “Yesterday was one of the best days ever in the King’s Cup, with our cruisers running three races compared to the usual two. Today was beautiful, nothing to not enjoy. It was a harder day due to wind against tide, which makes the seas choppy – a fatiguing day for sailors, although good for beating upwind on boats that go over the waves rather than crashing through them. It felt a bit chaotic today with media and sponsor boats closely wrapped up in the action, but this is one of the things that made it so awesome to watch. It was immensely fast today too; we finished a 7 mile course this morning and a 24 mile run in the afternoon – all in five hours; that’s how quick it was concluded. It was a day of grunt over smarts, and the race had everything that sailing should offer.”

Beyond the highly charged competition at the sharper end of the IRC classes, there is a great sense of fun and passion for participation, with new teams represented across the Phuket King’s Cup Regatta groupings.

A team from Osaka, a mixed male and female 20-person crew on a boat called Shiraz, are new to the Regatta this year. Their skipper Seiichi Tohyama said, “We literally just flew in from Osaka and chartered a boat. We know it’s unlikely that we’re going to be beating some strong entries in our group. We’re here to have fun. We’re here to experience just why so many people love this event. We’re here to enjoy the great hotels, have some drinks, appreciate the respectful yet enjoyable atmosphere, and just be out on the water soaking up the atmosphere and the amazing vibe of the Phuket King’s Cup Regatta.”

Shiraz skipped the start line early yesterday to earn a disqualification, but one poor result can be optionally discarded during the week. The team did a great job today, finishing 12th in a big fleet of Bareboat Charter A boats.

Former Commodore Anthony Clemence, who has not joined the Regatta for the last eight years, was in attendance for the landmark 30th Anniversary race. He says, “I was part of the original team who started the regatta all those years ago. We began with a very limited fleet of small keels, and yet after five years, it had become a noticeable event with the gravity able to attract a sizeable and quickly growing fleet. To see the progress from there up until today is wonderful, something really special. It was hard to make it grow in the early days, but with the support of His Majesty King Bhumibol Adulyadej, we respectfully engineered the original essence of the event’s success. It has now been honed to near perfection, and is clearly one of the world’s best regattas.”

The sponsor of today’s racing was CPN, a member of Central Group, which brought its senior team to observe and enjoy the on-water action from the comfort of a 90-foot luxury motor cruiser which served as the amazing sponsor boat this year. Director of Social Affairs and Publicity for CPN, Supichaya Suracupt, said, “We’ve known about the Regatta for many years, and so for the first time last year, we worked with the Organizing Committee to become a sponsoring partner. Everything about this event is just amazing, but this 30th Anniversary regatta is very special indeed. Sailors come from all over the world, and it is this that makes this such a signature event for Thailand, something all Thai people can be proud of. The race management and event organizing throughout is world class, the hospitality is always exceptional, and for sponsors it’s relatively easy to realize a return on investment in terms of sponsorship. We are currently building our new Central leisure and retail location in Phuket, a luxury mixed-use mall development set to be completed in Q4 2017, and so in this respect, the world class nature of both the Regatta and our construction are perfectly aligned in terms of delivering on brand promise.”

The 2016 Phuket King’s Cup Regatta competitive classes include Keelboats and Multihulls and International Dinghy Classes. All participants, local and international sailors and organizers join in 89 seconds of silenceto mourn the passing of HM the late King Bhumibol Adulyadej at the opening event. There will also be the “Sail Pass” ceremony off Kata Bay, in honor of His Majesty King Maha Vajiralongkorn Bodindradebayavarangkun. 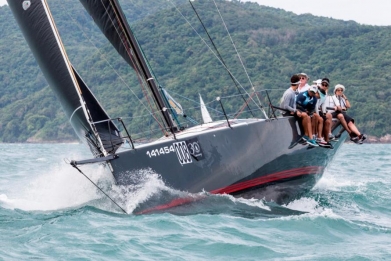