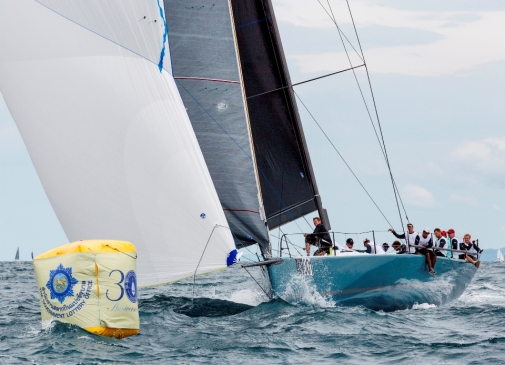 Phuket, 5 December, 2016 – The Phuket King’s Cup Regatta Under Royal Patronage officially opened its first day of racing in reliable, blustery winds and with none of the foreboding promise of storms predicted last week. Overcast skies and cool conditions made for great sailing without the stinging heat and lighter gusts of previous years, with most teams happy with the overall sailing conditions.

Kevin Whitcraft, President of the Phuket King’s Cup Regatta Organizing committee and also skipper of his boat, THA72, opened with two wins in the IRC0 grand prix class. He spoke of his delight at the early pair of wins for this historical 30th Anniversary year: “Racing conditions were beautiful today; the winds were strong, 18 knots to begin, lightening up in second race. Some boats were damaged during the course of today’s racing, but most of the entries got home ok. We had a small tear on one of our spinnakers which happened on the last drop but nothing serious. We’re head to head with Ray Roberts this year, as some other boats were damaged on route to Phuket, so we should have had five boats but we’re match racing after today! They had excellent speed upwind and were very close, but we pulled away downwind with our boat planning well. Tomorrow will be lighter as we understand it, so this will be a good test of crews - not just specialists winning. An interesting week as to how it pans out, and a nice start to the 30th Anniversary.”

They were joined in double-victory by Japanese competitors Karasu, who won both their races in IRC1, while in the Australian-dominated IRC2 class, Belinda Cooper skippering Senga took two of the first three races. The stunning-looking Shahtoosh took a win in Premier Class, with Pine Pacific, a long-standing King’s Cup racer also winning today.

The racing today was watched by Admiral Varong Songcharoen, Royal Thai Navy (retired), who said, “I am here to watch the Phuket King’s Cup Regatta every two years as it’s something that will be forever special to Thailand. I’ve been involved with the event for 24 years now, and the Royal Thai Navy also has a significant investment of time and passion in the King’s Cup. We’re pleased to see it continue to grow the brand into the future through its engagement with young Thai sailors and especially Chinese competitors, and build on its reach across the world. Still, the Regatta will always deliver the excitement, excellent course management and world class judging that the long established competitors expect and enjoy year on year.”

Jumnian Chukiat, a representative of the Revenue Department of Phuket, says, “The Regatta is one of the top ten most important events for the South of Thailand in terms of generating revenues, both for government and for the local economy. We are pleased to see the regatta’s international reputation continue to grow, and with it, the economy of Thailand. The event has very good positioning and history, and it is respected in many other markets around Asia.”

Wallee Pachhantabutr, co-sponsor of this year’s regatta, Managing Director of Kan Eang restaurant in Phuket and owner of the sponsors’ VIP hospitality boat, a recently refitted 90-foot motor yacht named The Origin, says, “The Regatta raises millions of Baht for the economy of Phuket, and it has a knock-on positive effect to businesses of all shapes and sizes that are directly and indirectly connected to the race and its series of lifestyle happenings. The Regatta enjoys a superb international reputation, which is why you see so many competitors come to race here year after year. It’s a trophy which is widely known and widely loved. It has a great brand character, and the trophy now represents 30 years of work by the Phuket King’s Cup Regatta Organizing Committee.”

The 30th Anniversary marks a change in direction for the classic race, with strong interest from the industry and from competitive sailors in China. The Regatta is working to engage this very large and growing market in mainland China as well as other high potential overseas markets, including the UK (this year’s race attracted some extremely experience British sailing teams in several classes).

Santi Kanchanabandhu, Phuket King's Cup Regatta Organizing Committee, notes, “We have more Chinese competitors in the dinghy fleets, and three notable entries from three main cities in China; Beijing, Shanghai and Shenzhen. It’s really important for us to grow the brand into China as we go about building the King’s Cup into one of the world’s premier sailing events. The young Chinese sailors and Thai juniors who join our fleet now (this year being the largest ever dinghy fleet) are the future of the Regatta, so to see this enthusiasm gives us bright hope for the future of the Phuket King’s Cup Regatta. The brand platform is very solid and the recognition continues to build on our efforts to look to the future. Our young generation will carry the King’s Cup brand forward, and out into a wider world reach. I can genuinely see this one day becoming the world’s greatest regatta.”

The 2016 competitive classes include Keelboats and Multihulls and International Dinghy Classes. All participants, local and international sailors and organizers join in 89 seconds of silenceto mourn the passing of HM the late King Bhumibol Adulyadej at the opening event. There will also be the “Sail Pass” ceremony off Kata Bay, in honor of His Majesty King Maha Vajiralongkorn Bodindradebayavarangkun. 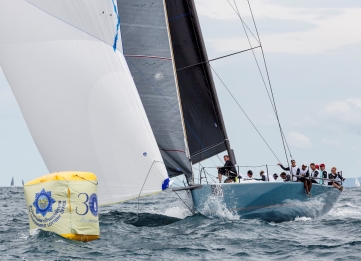