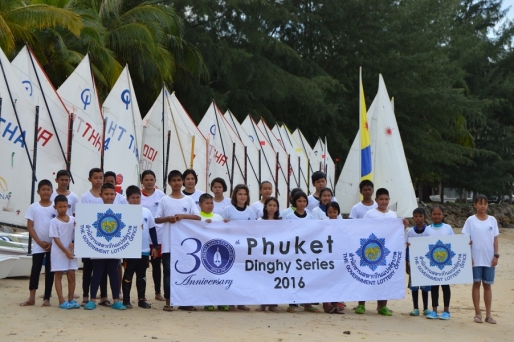 Bangkok – The Phuket Dinghy Series 2016 wrapped up at Bang Tao Beach off the west coast of Phuket, with Optimist sailors and Laser sailors from sailing clubs in Phuket, Phang Nga and Songkhla competing ahead of the main Phuket King’s Cup Regatta 2016. Following earlier series races in July and September at 3rd Naval Area Command beach off the coast of Cape Panwa, a total of 28 young sailors hit the water to compete in stiff winds and manageable swells. Among the Optimists, boy sailors from Phuket Youth Sailing Club took the three top places, with Bunyamin Klongsamut overall winner. The girls’ competition was won by Yada Hasap from NAC3SC, whilst for the Laser fleet, Tanakorn Kaewluan from Songkhla Sailing Club took class honors. All winners will join the Royal Prize giving ceremony of the 30th Phuket Kings Cup Regatta.

CAPT. Pornprom Sagultem, Phuket Dinghy Series Event Director. of the Royal Thai Navy, said, “It is the aim of the Phuket King’s Cup Regatta Committee and its associated event partners to increase and build on the level of enthusiasm which young sailors already have for the sport, and to support its ongoing development. The Phuket Dinghy races provide a variety of sailing conditions at different locations, giving the youngsters a mix of experiences and testing their sailing skills.

The Phuket Dinghy Series was introduced in 2010 as part of the Phuket King’s Cup Regatta Under Royal Patronage, creating a network between sailing clubs to inspire more youths in Thailand to take up the sport, especially the Optimist challenge for the under 15 years. The Dinghy Series has helped bring to the fore many young Thai sailing talents who will hone their skills and eventually compete in full-size regattas – especially the Phuket King’s Cup Regatta, of which the Dinghy Series serves as early precursor ahead of the main event.

The Phuket King’s Cup Regatta 2016 will be held off Kata Beach Resort & Spa, Phuket, from 3 - 10 December, 2016, hosting international racing classes across which over 150 boats and 1000+ sailors compete for one of sailing’s most prestigious trophies. Phuket King’s Cup Regatta has played a part in the development of youth sailing in Thailand, encouraging more young sailors to take up the sport and empowering the development of talented and aspiring skippers.

For three decades, Phuket King’s Cup Regatta has been the pinnacle of international regattas in Asia, dedicated to HM the late King Bhumibol Adulyadej for his passion and support for the sport of sailing. The Phuket King’s Cup Regatta has also helped to position Thailand as one of the world’s premier and most popular centers of the International yacht racing scene.  The event routinely attracts more than 100 yachts from around the world with over 1000 sailors of different nationalities to compete in the glittering Andaman Sea waters off the coast of Phuket.

The Phuket King's Cup Regatta is organized by the Phuket King's Cup Regatta Organizing Committee under the auspices of the Royal Varuna Yacht Club, in conjunction with the Royal Thai Navy, Yacht Racing Association of Thailand, and the Province of Phuket. The most prestigious regatta in Asia includes Phuket Dinghy Series, International Dinghy Classes, Keelboats, Multihulls and Kiteboard amongst its competitive classes. 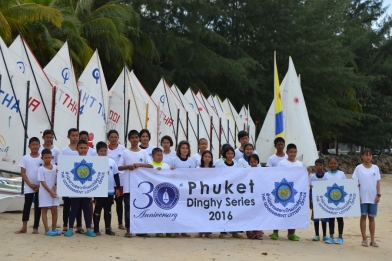