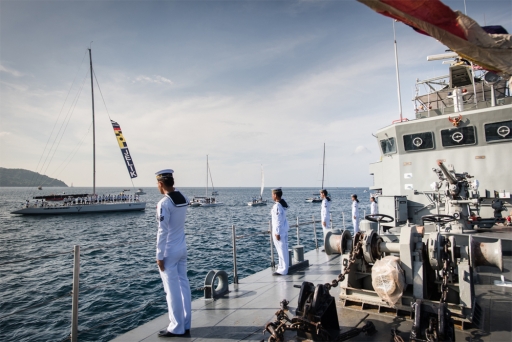 Royal Thai Navy vessel HTMS Klaeng and 168 boats complete a sail pass to salute His Majesty the King of Thailand at the 29th Phuket King’s Cup Regatta under Royal Patronage.

Phuket–The 29th Phuket King’s Cup Regatta began with a sail pass in honour of the Birthday of His Majesty the King of Thailand, with a procession of 168 boats passing the Royal Thai Navy vessel HTMS Klaeng, each saluting an image of His Majesty. The Navy ship along with other Royal Thai Navy vessels were fully dressed and stationed off Koh Pu, and joined with racers and cruisers from the 2015 Regatta fleet. At 8.30am, a sound signal was given for the fleet to form to formally complete the Royal Salute in beautiful conditions ahead of the first day of the regatta.

The 29th Phuket King’s Cup Regatta sail pass marks the start of a week of spectacular racing between keelboats, multihulls and dinghies, all competing in crystal clear Andaman waters to win one of sailing’s most prestigious trophies, bestowed by His Majesty the King of Thailand.