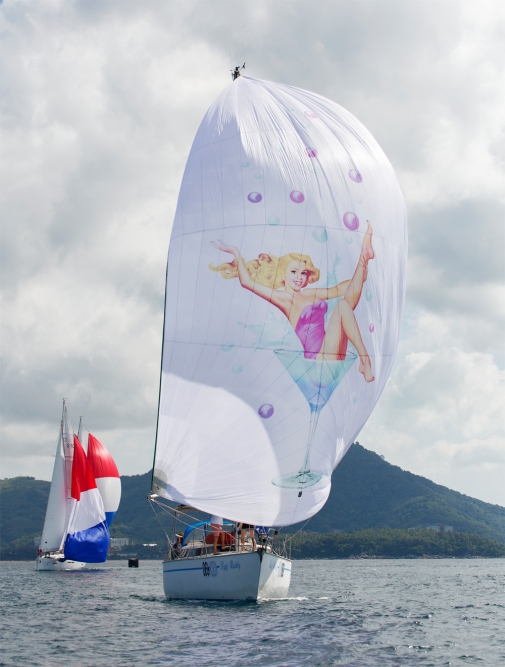 In IRC0, Windsikher II skippered by Sarab Jeet Singh made the best of the light running, finishing race seven first on corrected times, just 4 seconds beyond the reach of Team Premier Oi! Line honors went to Duncan Hine skippering Alive, which finished 4th on corrected times (elapsed 51:50, three minutes out in front). Winds picked up for brief moments during race 8, and so afforded just enough opportunity for Frank Pong’s Jelik to guide his crew to victory, beating out Windsikher II by 40 seconds on corrected time. Windsikher in race 9 scored a third place tie, leaving Duncan Hine’s Alive team to put in a great last run for the day to win. Sarab Jeet Singh remains extremely relaxed and quietly confident ahead of the final day’s racing tomorrow. Windsikher II is top of the Class with a score of 14.5, with Millennium Racing behind on 21.

Among the IRC1 entrants, Kenn Eyears and Rerefine (formerly Windsikher) took race seven, finishing fifth but enjoying a positive handicap correction. EFG Mandrake III was second. Kevin Whitcraft’s GP42 ran well in the second and third races of the day, besting all runners for a comfortable finish on both elapsed and corrected times in both. Wan Ma Rang and Rerefine are tied for first place at the top of the class going into the final day!

Japanese team Karasu skippered by Yasuo Nanamori came on strongly today to best their close rivals Roland Dane’s Jessandra II team, which was second – with just seven seconds to split between them on corrected times. IRC2 will belong to one of these fierce rivals. Karasu couldn’t quite do the double, finishing runner-up in race 8 behind Fujin skippered by Mick Tilden, with Jessandra II in 3rd place. A new winner emerged today in race 9 – Russian Nikiforov Evgenii skippering Megazip, with the team sailing home in first place and staying there after time corrections. The Japanese team is two points clear at the top of the Class.

Defending Champions Pine Pacific has already won the Premier Class after another two victories today. None of the remaining Premier fleet could match the blazing pace of Pine Pacific, which took line honors again today in both races. A win by Kim Ramen and Adrian Fini on Audeamus in race six was a massive credit to the team, given that they defeated the previously unassailable THA2555 by 32 seconds on corrected time.

Andrey Novikov skippering Alexa was back to winning ways in Bareboat Charter, with another solid performance today. Their perfect run means that they have technically won the Class.

Vladimir Oleynikov’s Open Charter entry Popeye has cruised easily through the Class so far, but come Friday, they gave second best to another Russian entry, Venture, skippered by Boris Gusev. Popeye has already won the Class of 2015’s open entries.

The Royal Thai Navy entry, Thai Navy 1 skippered by Cpo.1 Wiwat Poonpat, ran another exceptional race today to claim victory in Modern Classic. The team finished by a wide margin ahead of rivals, with Lincoln Redding’s Tornado (Tuay Lek) in second. All boats in the class race with a similar handicap, making this one a straight-out dash to the finish (albeit completing the course fairly late in the day, in winds that fell to 2 knots at times). The Thai Navy team is top on points, four ahead of Farrgo Express.

There was a new winner in Cruising Class too today, with Dragon's Back (PHPLUS) skippered by Dean Chisholm leading a sparsely separated fleet of cruisers. Tony Byrnes and Mohawk finished third behind Rod Mulcahy and his Slipstream team, with the chasing pack some way behind. Mohawk has already achieved victory after its third place is discarded.

Races six, seven and eight of theFirefly 850 Sports Class went to John Newnham and Twin Sharks yet again, with a massive effort to place the boat two-and-a-half minutes in front of the pack in the first race; and what a close race it was between the rest, with just 6 seconds separating Moto Inzi and Voodoo. Twin Sharks’ unrelenting effort has resulted in early Phuket King’s Cup Regatta victory.

A good win for Asia Catamarans Hurricane today in the Multihull Racing Class race 6, with Alan Carwardine and his team finishing quickest on corrected times in today’s first run. Honorable mention must go to Danny Moore and Three Itch, which completed the course in a very quick 36:43 on elapsed time, four clear minutes ahead of anyone else. Danny’s crew built upon their strong turn of pace to take victory in race 7, leaving the class open going into the final day and overcoming a difficult handicap. Three Itch compounded a great day’s racing with a win in race 8; a superb Phuket King’s Cup performance. One point separates three teams at the top of the Class.

Performance Multihullswas won by Elizabeth Schoch who has been on exceptional form throughout the regatta. She enjoyed a six whole minute lead today, with Multihull Solutions H3O unable to do anything about a Corsair Pulse that has never looked back. She took race eight too, enjoying a close fight to the finish with her Australian rivals to win the Class.

This year’s Phuket King’s Cup Regatta has delivered a highly competitive four days so far. As the week heads to its conclusion, those teams not in contention for Class honors this time around can look ahead to next year’s 30th Anniversary Regatta. Already, excitement is building for what will be a massive event for anyone involved with sports sailing in Thailand and the wider region; and, the marking of a remarkable milestone for the Phuket King’s Cup Regatta under Royal Patronage.