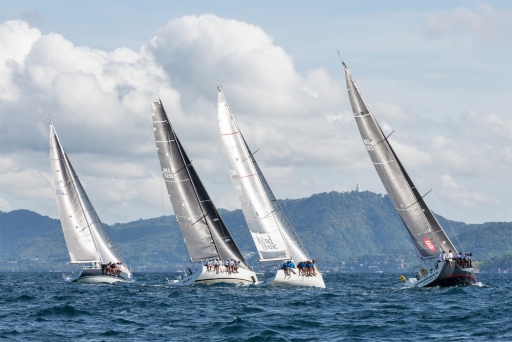 IRC0headed out for race 6 on an extensive 34 nautical mile course, a total run of around three hours for some in the class. Duncan Hine’s Alive team made the most of Champagne sailing conditions, managing a 2:39.27 elapsed time, with Frank Pong’s Jelik team eight minutes behind on elapsed time and a nervy three minutes behind on corrected time. Team Premier Oi! skippered by Hannes Waimer placed 16 seconds behind on corrected time, with 16 seconds again separating positions 4 and 5 (on elapsed times, Windsikher II and Millennium Racing, respectively).

In IRC1, Kevin Whitcraft’s Wan Ma Rang team made out like a bandit on the week’s endurance day, putting in a winning time of 3:36.42. EFG Mandrake III chasing them trailed by 13 minutes, but after handicap corrections they finished just three minutes adrift – another excellent charge over a reasonably challenging course.

No surprises in Premier Class, with defending Champions Pine Pacific routinely pushing buttons on what is now looking like a forgone conclusion of a Class. Team Audeamus made a strong fist of challenging, finishing nine minutes behind the now ubiquitous THA2555 sail, netting two minutes off on corrected times.

Bareboat CharterClass comprises a fleet of 14 traditional shallow draft bareboat yachts, including four Japanese teams and seven Russian teams. Andrey Novikov skippering Alexa, who have so far had things their own way, placed third today, their weakest run of the week so far (and a possible discard). This left the top spot open for compatriot Vasily Mikhalev to win on Isabella, with another Russian team, Uhuru, in second. One hour covered the Bareboat Charter fleet from top to bottom.

Race five of theFirefly 850 Sports Class fell to John Newnham and Twin Sharks, on what is probably this year’s toughest and most difficult-to-call grouping. Two minutes behind on corrected times was Hans Rahmann and Voodoo, with Moto Inzi in third.

John Coffin skippering Java won yet again in the Multihull Racing Class race 5, while Alan Carwardine and his Asia Catamarans Hurricane team finished a relatively slow (for them) fourth place. Danny Moore skippering Three Itch was the first boat to finish, but a tough handicap saw them corrected to 5th.

Performance Multihullsgot the chance to run three times today, with two short courses ahead of a toughie in early afternoon. Elizabeth Schoch recorded an excellent 1-1-2, with Scott Galle’s boat the quickest of rivals. This one-make series (on only its second outing) is based on the Corsair Pulse 600 racing multihull, the latest design from the world's largest trimaran manufacturer.

In International Dinghy Classes Race 2015, Chanokchon Wangsuk is first overall after six races, with a possible 12 races to sail in total. She is fastest of the girls, whilst Saranwong  Poompat is quickest of the boys. Keerati Bualong is currently leading the Laser Standards, having won five out of six races so far. Chaichanawut Deenak leads the Laser 4.7 tables; Navee Thamsoontorn sits at the head of the Topper Class, with a narrow lead after half the races have completed.