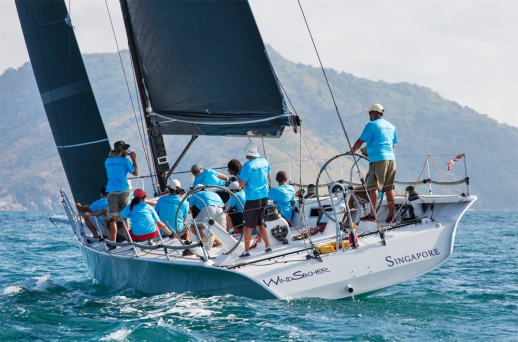 12 December 2015, Phuket–The final day of the 29th Phuket King’s Cup Regatta 2015 is sponsored by Kata Group, with Kata Beach Resort & Spa providing the home of both race control, the regatta’s Royal Awards Ceremony and the closing party. Before the fireworks can be lit, there’s some serious class warfare to play out. Keelboats and multihulls hit the water for one last run, as teams fight for the honor to claim Phuket King’s Cup victory in the name of His Majesty the King of Thailand.

In IRC0, Windsikher II skippered by Sarab Jeet Singh has made a great fist of challenging for King’s Cup glory in 2015 with a string of first and second place finishes. They carried an advantage in both points and momentum going into the last day, and seemingly only an unexpected upset could derail their fantastic run. They took both race 10 and race 11 today, two bullets, as if underlining the completeness of the week’s massive performance.

Sarab Jeet Singh, skipper of Windsikher II, is delighted to finally win a Phuket King’s Cup Regatta, after coming second and third in the past in many runs out since 1997: “We had the points advantage going in, but anything can happen, any equipment failure or other issue on route. Second place is a threat, and so we decided to sail the same way, no messing about, with keen roundings. This is my sixteenth King’s Cup since 1997, my first win. Our Welbourn 52 custom boat had the same crew as my other boat (Sydney 40), and we’ve basically enjoyed ourselves and did really well. Courses were well organized but the light breezes are always challenging here. The team did well and the only reason I bought this boat was because I knew we had a team that could step up.”

Among the IRC1 entrants, Kenn Eyears and Rerefine (formerly Windsikher) have led the class ahead of Kevin Whitcraft’s Wan Ma Rang which chases by a single point. Both teams were in relaxed spirits at last night’s party, but today it suddenly got very real again. Wan Ma Rang took line honors in race 10, but placed 90 seconds behind Rerefine on corrected times. In race 11, Rerefine won again to finally nail home their Regatta trophy claim for 2015.

Pine Pacifichas already won the Premier Class after another two victories yesterday, and must have settled into a gentle cruise home today – although true to form, still taking line honors (and then another win, just for luck). Audeamus skippered by Kim Ramen & Adrian Fini took a consolation win in race 7.

Andrey Novikov skippering Alexa in Bareboat Charter put in another predictable first, securing a towering King’s Cup Regatta win for the Russian team. Their massive form run of 6-for-7 put them miles ahead of any rival in final scoring for the Class.

Vladimir Oleynikov’s Open Charter entry Popeye has had a marvelous run so far in 2015. The Russians took another seemingly sweat-free run today, finishing fastest on both elapsed and corrected time - twice. Their Phuket King’s Cup Regatta victory has been emphatic, dominating the class by winning their first four races at the beginning of the week – and never looking back since.

The Royal Thai Navy entry, Thai Navy 1 skippered by Cpo.1 Wiwat Poonpat, achieved Regatta glory in Modern Classic Class in honor of His Majesty the King. The team finished well ahead of the rest of the fleet again today to win both of their races.

IRCCruising Class race six was won by Thai-registered Slipstream skippered by Rod Mulcahy. Slipstream and Mustang Sally were tied up after the last race, and on countback, Slipstream’s race win from yesterday proved invaluable; an edgy final day decider.

CruisingClass race six fell to a Chinese entry named Atom, skippered by Jian Quan Tong. Tony Byrnes and Mohawk, who won the first four races in spectacular fashion, had done enough by midweek, and are named winner of the Class.

Of the two Classic entries this year, Cedric Rimaud skippering Selma took every race in the regatta apart from on the first day’s racing. The boat did well, completing every course in allotted time limit.

Firefly 850 Sportshas been absolutely owned by John Newnham skippering Twin Sharks all week, with seven wins before today. Hans Rahmann’s Voodoo team took a consolation win in race 9 but were 8 points adrift at the close.

In the Multihull Racing Class, Alan Carwardine and his team led the Class by three points ahead of Team Java. Asia Catamarans Hurricane claimed a narrow victory over another very well sailed boat, Three Itch, in race 9. Race 10 completed their two bullet performance for the day, and well-earned Regatta honors.

InCruising Multihulls, Japanese entry Minnie, which has performed brilliantly this regatta, came second behind Star Fruit, but the team had done enough to win the class by four points.

Performance Multihullswas won by Australian Elizabeth Schoch on Sudu3, and shehas been on exceptional form throughout the regatta. She enjoyed first and a second on the last day of the King’s Cup, completing a magical run in this new Class.

As is Phuket King’s Cup tradition, the week ends with a fantastic beachside party at Kata Beach Resort & Spa, Pramookpisitt Achariyachai, President of Kata Group Resorts Thailand, said, “We are proud to continue to support the Phuket King’s Cup Regatta for the last 17 years as it is one of the most internationally significant regattas in the world of yachting. This event is a great opportunity to support Phuket's policy to make this province a World Sports Paradise through which it attempts to attract notable sporting events. The Phuket King’s Cup remains the biggest highlight of the calendar.”

Kevin Whitcraft, President of the Phuket King’s Cup Regatta Organizing Committee, said, “On behalf of the Phuket King’s Cup Regatta Committee, it is an honor to organize this most prestigious regatta to sail in honor of our King, the Regatta Royal Patron who celebrated his 88th birthday this year. This year’s keelboat and multihull fleets consisted of 90 craft, divided into 13 classes, and some 78 dinghies racked up a total record of 168 entries with some 1,000 participants from over 40 countries.”

He continues, “Over the past three decades, there is no question that the King’s Cup, with HM’s imprimatur, has been the catalyst for the enormous advance of water sports in the Kingdom, resulting in many world class competitions coming to our shores, the latest being the international Optimist class approving a world championship next July to be raced at the Royal Varuna Yacht Club in Pattaya. I congratulate all the winners and all who have competed in a fair, friendly sail fest and urge all to return to Phuket for the next years’ 30th Phuket Kings Cup Regatta.”