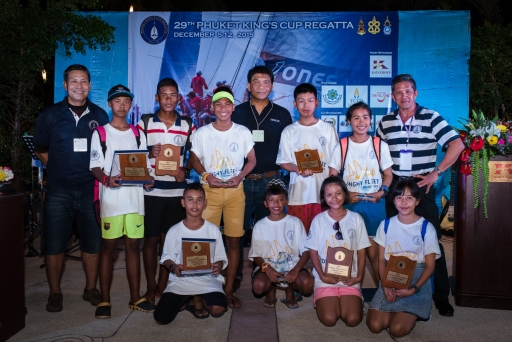 In Photo:Associate Professor Thanavath Pholvichai (4th from right), the Government Lottery Office board member together with youth sailors who competed in the Phuket Dinghy Series, part of the 29th Phuket King’s Cup Regatta 2015 under Royal Patronage, at the Opening Party held at Kata Beach Resort & Spa.

Phuket–Government Lottery Office (GLO), a new strategic partner of the Phuket King’s Cup Regatta under Royal Patronage, hosted a prize-giving party for youth sailors competing in the Phuket Dinghy Series, a part of the larger Regatta. The Phuket King's Cup Regatta is a great opportunity for enhancing GLO's mission in developing CSR programs that help children spend their time wisely. GLO sees sailing as the perfect outdoor activity that fosters leadership, decision-making and camaraderie. The Government Lottery Office is keen to encourage more young sailors to take up the sport, and wishes to empower the development of talented and aspiring Thai skippers.

Associate Professor Thanavath Pholvichai, Government Lottery Office board member said, “The Phuket Dinghy Series is a vibrant kick-off for the Phuket King’s Cup Regatta 2015, providing a catalyst for community gatherings at which kids can have fun, talk and share experiences together. Importantly, it has a positive effect that reaches many levels of our society, creating an important thread that ties together our social fabric in line with our CSR objectives. It is this type of event that GLO deems to be very important for the development of Thai youths.”

The Phuket King’s Cup Regatta brings together organizations in both public and private sectors to promote and support all ages of young Thais by giving precedence to sports. The prize-giving for the Phuket Dinghy Series boosts the good morale of young athletes who have dedicated themselves to the spirit of sports and racing.