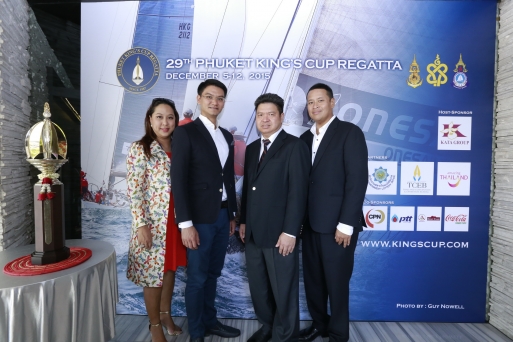 Phuket–Central Pattana Public Company Limited (CPN), part of Central Group, Thailand’s leading company which has established a leadership position in almost all of the business sectors it has a presence in, namely: retail, shopping malls, real estate, brand management, hotels and resorts, as well as food servicing businesses is sponsoring the Phuket King’s Cup Regatta 2015 for the first time. In doing so, CPN reaffirms its investment in the growth of Phuket as a burgeoning luxury lifestyle and retail mecca. CPN initiated investments in Phuket in 1997, and has enjoyed massive growth together with the expansion of the Phuket market ever since. CPN is confident that Phuket will continue to grow to accommodate the lifestyles of high-end tourists and Phuket residents alike.

Wallaya Chirathivat, Senior Executive Vice President of CPN,said, “CPN has great confidence in the ongoing growth of Phuket as one of Thailand’s premier markets for retail and leisure operators. We are pleased to be able to announce our first sponsorship of the Phuket King’s Cup Regatta 2015, and strongly believe that this sporting event makes a considerable contribution to the Island of Phuket, and in attracting a diverse mix of tourists. It is one of Phuket’s standout calendar attractions, and we recognize that association with Asia’s classic race Under Royal Patronage aligns well with our commitment to investing in the growth of Phuket.”

Central Group is also committed to the growth of Phuket’s reputation as a world-class marine tourism center, helping to build awareness for the Phuket King’s Cup Regatta and the Island of Phuket on the world stage.

Santi Kanchanabandhu, The Phuket King's Cup Regatta Organizing Committee,said,“We are delighted to have Central Pattana Public Company Limited (CPN), a part of Central Group, sponsoring the 2015 Phuket King's Cup Regatta. Support from CPN this time will help the growth of Phuket’s economic performance in the hospitality & tourism sector, and strengthen the potential of Phuket Island for future successful growth.”