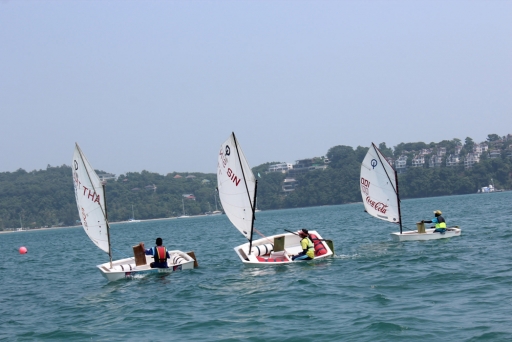 Phuket–The Phuket Dinghy Series 2015 wrapped up at 3rd Naval Area Command beach off the coast of Cape Panwa, with Optimist sailors and Laser sailors from Phuket and Songkla in competition at one of the best sailing areas of Phuket. Following earlier series races in June and August, a total of 53 young sailors hit the water to compete in stiff winds and manageable swells. Among the Optimists, boy sailors from Phuket Youth Sailing Club took the three top places, with Nattapong Yongram overall winner. The girls’competition was won by Keeratika Klongboon from NAC3SC, whilst for the Laser fleet, Teerapong Torkratoke from PYSC took class honors.

The Phuket Dinghy Series was introduced in 2010 as part of the Phuket King’s Cup Regatta, creating a network between sailing clubs to inspire more youths in Thailand to take up the sport, especially the Optimist challenge for the under 15 years. The establishing of the Phuket Dinghy Series has helped bring to the fore many young Thai sailing talents. The program supported in past years by PTT group serves as an accessible means of competition for young sailors from many sailing clubs in Phuket, Phang Nga and Songkhla in order to prepare them for the international competition, and for the Phuket King's Cup Regatta.

International Dinghy Classes will race once more from 7-10 December at Kata Beach as part of the Phuket King’s Cup Regatta 2015. Classes are divided into Optimist Boys, Optimist Girls, Laser Standard, Laser 4.7 and Topper. Its inclusion in Phuket King’s Cup Regatta has played a part in the development of youth sailing in Thailand, encouraging more young sailors to take up the sport and empowering the development of talented and aspiring skippers.