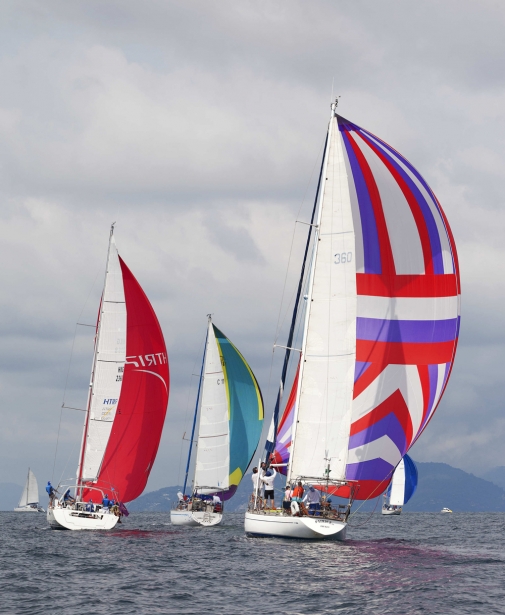 Phuket–One of the standout international sporting events in the Asia region, the 29th Phuket King’s Cup Regatta Under Royal Patronage prepares to set sail once again, swelling Phuket visitor numbers and making a large contribution to overall Thai tourism performance. The Phuket King’s Cup Regatta 2015 will be held at Kata Beach Resort and Spa, Phuket from 5th December to 12th December, and will host international racing classes across which over 150 boats and 1500+ sailors will compete for one of sailing’s most prestigious trophies, bestowed by His Majesty the King of Thailand.

Under Royal Patronage, the Phuket King's Cup Regatta is organized by the Phuket King's Cup Regatta Organizing Committee under the auspices of the Royal Varuna Yacht Club, in conjunction with the Yacht Racing Association of Thailand, the Royal Thai Navy and the Province of Phuket. The region’s largest regatta includes dinghies (International Dinghy Classes), keelboats and multihulls amongst its competitive classes, and will feature a sail pass to celebrate His Majesty the King's birthday. The Royal Awards Ceremony will be held on 12th December.

Kevin Whitcraft, President of the Phuket King’s Cup Regatta Organizing Committee, said, “The diversity of craft, international complement of crews and the highlight spectacle of the post-race parties make this regatta a stand-out attraction in the region. As we stand but one year away from the magical “Pearl” milestone of three decades of the King’s Cup, we’re very proud of the contribution this magnificent event makes to Phuket and Thailand, and to the sport of sailing globally.”

Consisting of five days of racing on scenic courses amidst the beautiful Andaman Sea islands, the Phuket King’s Cup Regatta draws sailors and support crews from over 40 countries, including USA, Australia, Great Britain, Russia, Japan, Singapore, Malaysia and China. This international gathering is a key event on the Phuket tourism calendar, generating over 400 million Baht for local businesses, and offering residual value as it helps to grow the Island of Phuket brand as a premier sports paradise on the world stage. Sailing in Thailand also enjoys a great boost from the regatta as young Thai sailors are able to develop their sailing skills in dinghies, and go on to join international keelboat crews competing for class honors.

As well as bringing some of the world’s fastest independent racing teams, the Phuket King’s Cup Regatta is famed for its beachside party series. Revelry and camaraderie to the backdrop of fireworks and live music form a big part of the attraction for competitors - and for sponsors also; a draw for Thai companies and international brands keen to grow their presence on a cosmopolitan platform, the parties are an essential event on the Phuket social calendar. The regatta offers sponsorship and media engagement opportunities as well as premier networking opportunities hosted across the party venues each night following conclusion of the day’s racing.

Keelboats and Multihulls are scheduled to compete firstly between7-9 December, with 10th December to be reserved as a lay day for competitors to adjust theirstrategies or fix their boats. The race will continue on 11-12 December. The full complement of classes for the 2015 race year include IRC Zero (international 'Grand Prix' boats), the highly competitive IRC 1, IRC 2, IRC 3, along with Sports Boat, Modern Classic, Premier, Open Charter,Bareboat Charter,Classic,Cruising, Firefly 850 Sports, MultihullsRacing,and MultihullsCruising.

International Dinghy Classes will race from 7-10 December at Kata Beach Resort and Spa. Classes are divided into Optimist Boys, Optimist Girls, Laser Standard, Laser 4.7 and Topper. Its inclusion in Phuket King’s Cup Regatta has played a part in the development of youth sailing in Thailand, encouraging more young sailors to take up the sport, and empowering the development of talented and aspiring skippers.

For regular visitors to the Phuket King’s Cup Regatta, the event is associated with top class racing and is an unmissable event on the world sailing schedule each year. For guests who have never experienced the excitement and highly charged competitive atmosphere, the Phuket King’s Cup Regatta 2015 is a must-visit showcase for the sport of sailing and for the Island of Phuket.