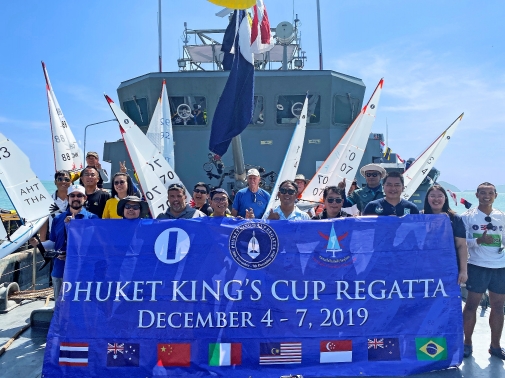 5 December 2019, Phuket– The International One Meter (IOM) class for radio-controlled yachts are making their first appearance at this year’s Phuket King’s Cup Regatta, recognition of the sport’s growing popularity.

The one-meter long radio-controlled boats are raced in more than 45 countries around the world and nine Thais will be testing their skills against an international field during Asia’s premier sailing event in Phuket this week from 4-7 December, 2019.

Brazilian Fred Rocha, the Chairman for the International One-Meter Class, is in Phuket to oversee his sport’s debut at the annual Phuket King’s Cup Regatta.

“The International One Meter class is one of four classes for radio sailing, but the one-meter class is the biggest around the world with over 45 countries taking part,” he said.

“We just hosted the 13th World Championship in Brazil which finished last week. The guys from Thailand did well and people love it. We had entries from 25 countries and 76 boats – that’s the maximum we can run at an event.”

For Rocha and the competitors, radio sailing is a serious event with not only technical skills required to operate the boats. These skippers also need to have the same understanding of the conditions on the water with winds and currents, the different types of sails needed and they use the same tactics employed by the skippers of full-sized boats.

“A lot of people see the boats as a toy, but when they see the intensity and the competition they change their minds. We have to set marks on the sea – everything is the same as a full-size boat,” he said.

Another challenge the radio sailors face in Phuket is where they will be setting their courses and racing their boats – they will be based on a Royal Thai Navy ship on the Andaman Sea and the competition will be held in open water a long way from shore.

“This year in Phuket will be our first experience of sailing from a battleship. We had to keep the number of participants low because the site is really narrow. So we’re going to have about 24 boats. It’s going to be a challenge sailing off the (Royal Thai) Navy boat,” said Rocha.

“We’re going to be right out at sea. Those little boats can handle about 45 knots of wind. They have three different rigs and it’s quite amazing. How far out will we go? We’ll just be looking for the wind, the same as the full sized boats.”

Rocha is hoping to build this already growing sport and sees Asia, and particularly Thailand, as keys to expanding and making the sport more popular.

“It’s an international field – we will have nine Thais and 13 skippers from abroad. We also have radio sailors from Malaysia, Singapore, Australia and China. Unfortunately, we just had the world championship in Brazil and there’s not enough time for the top guys to get here. Some have stayed on to visit Brazil.

The action out to sea is expected to be fast and furious for the radio sailors, and while the big keelboats and multihulls contesting this year’s Phuket King’s Cup Regatta aim to get two or three races in each day, the one-meter skippers have a much busier schedule.

“Our plan is to run about 12 races per day, so in three and a half days we are trying to hold about 40 races. It’s a lot. We have juries and race officials – we basically run the same as the big sailing events. We also have some special rules for radio sailing. But no handicaps. You can design your boat as you want, but it must weigh four kilos or more when it’s rigged, your keel and bulb can be more than 2,500 grams and you can have three different rigs, three different sails. So you can choose depending on the conditions.

“It’s a very unique sport. The top five will get prizes.”

“It’s great to see the radio sailors become part of the regatta,” said Kevin Whitcraft, president of the Phuket King’s Cup Regatta. “This is one more step in increasing the popularity of the sport of sailing.”

The Phuket King’s Cup Regatta, now in its 33rd year, has become Asia’s most prestigious sailing event and the 24 radio-controlled boats add to the fleet of almost 80 full-sized boats contesting the main regatta and 120 junior sailors battling it out in the International Dinghy Fleet.