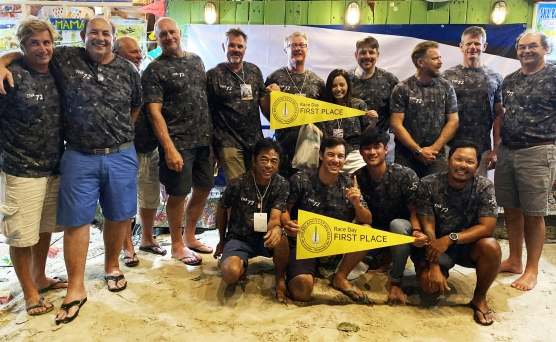 Photo Caption:Sailors from the THA72 boat, led by double Asian Games gold medalist Noppakao Poonpat (middle), pose for a photo after their first place finish in the IRC Zero class on Race Day 3 at the prize-giving party for the Phuket King's Cup Regatta, sponsored by RMA Group, at the Kata seafood and Ska bar on Phuket.

5 December 2019, Phuket– Withthe 33rd edition of Phuket King’s Cup Regatta underway, another sponsor has come on board to be part of Asia’s most prestigious sailing event.

RMA Group, a strategic partner of the annual Phuket King's Cup Regatta, and co-sponsor Ford, RMA Group's Automotive Partner, have joined forces in support of the 33rd edition of the regatta. The two companies have enjoyed a long-standing partnership for more than two decades which is underpinned by RMA's values of integrity, innovation and endurance.

"We are delighted to be participating in this prestigious and challenging regatta with the support of Ford in an ever increasing field of highly competitive international teams" said Peter Lawson, RMA’s Automotive Global Director.

"Additionally, RMA Automotive, the automotive modification and manufacturing division of RMA Group, is sponsoring the Day 3 sailing and prize giving party on Deecember 4th, and we wish all the teams the best of luck over the coming days", he added.

“RMA is happy to play a role in the development of sailing, especially among the youth, who now play such a big part of the Phuket King’s Cup Regatta.”

Sailors are involved in the International Dinghy fleet which is contesting the Optimist Boys and Girls, Laser 4.7 (Mixed), Laser Standard, Laser Radial and 420 classes.

Asia’s premier sailing event, the prestigious Phuket King’s Cup Regatta, is celebrating its 33rd year from 30 November-7 December, 2019. With 10 classes of Keelboats and Multihulls and six International Dinghy Classes, and the new IOMC class, the regatta aims to grow sustainable sailing communities and help develop the skills of a new wave of sailors and reaffirm Phuket as the hub for Asian Water Sports and Marine tourism.