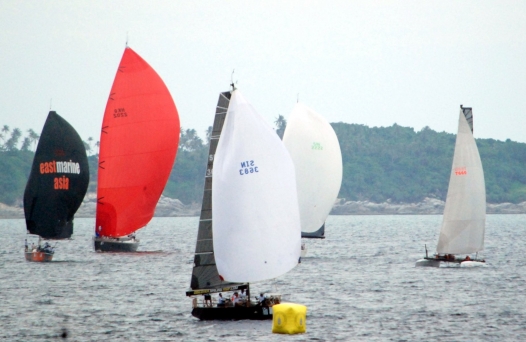 2nd December 2019: Although the rain interrupted the opening ceremony last night and today the overcast conditions spread a gray hue over the race course, the light 6 to 8 knot East North Easterly breeze, with slightly stronger gusts, got the racing away on time and stayed in long enough for the race officers to run two races, despite the strong tidal cross currents. As the top mark on the racing course was laid in the lee of the hill, on the entrance to Nai Harn Bay, it became a case of keeping your eyes out of the boat and staying in the wind lines, on the approaches to the mark. Some big gains and losses where observed and shuffled the class order on the two lap windward/leeward races.

The 5 X 52 footers in the IRC 0 class were billed as the clash of the titans, and they did not disappoint, as several place changes on the first windward leg, invariably led to shuffling of the order, until things settled down on the second lap. Although Ray Roberts TP52 Team Hollywood knuckled down and claimed two line honours, Sarab Singh / Nick Burns Welbourn 52 Windsikher II did better to score two handicap wins and finish the day on top of the leader board. PKCR Chairman Kevin Whitcraft's THA 72 and Roberts Team Hollywood shared 2nd and 3rd places, to be tied on 5 points and separated by the last race result. Two 4th places for James Johnstone's Eastsail and two 5th places for Rob Aldis Millennium Racing leaves them in 4th and 5th respectively.

After a general recall and several lead changes, the Japanese on Yasuo Nanamori's newly acquired Sydney 40 Karasu (Emagine), managed to take the daily double on the first race, in the IRC 1 class, but exchanged places with the Russians on Alexey Mashkins Cookson 12m MegaZip, on the second race, to end up tied on 3 points, sharing the top of the class. Mati Sepp's Swan 42 Club Loco from Estonia, had their chances but slipped up towards the end and finished up in 3rd overall.

The Chinese on Minzhi Fengs Mumm 30 Highlead Encourage (Judy) were first around the course, but their Chinese counterparts on Shen Sheng's 3/4 Ton Humphreys Bigboys Sailing Team (Madame Butterfly) managed to claim two handicap wins and go directly to the top of the IRC 2 class. Morton Jakobsen's VX One Design Sports boat Over Here, also managed to correct out into 2nd overall and reduced Fengs Highlead Encourage down to 3rd place.

Nine big Premier Cruising Class yachts lining up at the start line, is a sight to behold. They were sent on short island courses around Ko Kaeo Noi and back, which took one hour and a half to complete. Geoff Hill's Smith 72 Antipodes, led around the course but were relegated to 3rd place in the first race and despite holding onto their time in the second race, slotted into 2nd overall. Peter Cremers Warwick 75 Shahtoosh, did one better with a 1, 2 score line, to sit pretty at the top of the scoreboard. Second and third for Thailand's Ithinai Yingsiri's X55 Pine-Pacific leaves them one point back in 3rd overall and this class is just warming up.

After playing a game of musical chairs during the off season, Dan Fidock must be happy with the reigning Aussie champion, Grainger 10m (Ex Mad Max) and renaming it Fugazi. As they posted two handicap wins, in front of the faster boats and now lead the Multihull Racing Class. Gaetan Verhegge's 10m Bakewell White Fugazi - Team Blood Red and Mark Thornburrow's defending champion, Moore 36 Bonza (Ex Fugazi), traded 2nd and 3rd places, to be tied on 5 points and longing for stronger wind, so they can stretch their legs.

Despite leading off the start line in the one design Firefly 850 Sports Class, Hans Rahmann's Voodoo eventually was overtaken by John Newnham's all conquering Twin Sharks, in both races, to take their respective places on the leaderboard. Peter Taylor's Ballerina and Neil Ayre's Mamba, traded 3rd and 4th places to be tied on 7 points and fighting over 3rd overall.

In the Cruising Multihull class, Zhang Yongdong's Andaman Cabriolet Wuhan University EMBA Sailing Team (Da Vinci) and Andre Lee's Klook Star Trek shared the honours to be tied for 1st overall. Two 3rd places for Theimann Peter German Team on Alienkat, slots them into 3rd overall and will have to go harder to catch up with the leaders.

The Russians on Andrey Novoderezhkin's Bavaria 36 Kata Rocks Sea Escapes have been promoted to the Cruising class this year and have continued on their winning ways, with two wins to top the class. Eric Alfredson's Swanson 36 Awatea and Andrew Merry's Hanse 415 Night Train traded 2nd and 4th places to be tied on 9 points and fighting over 2nd and 3rd overall.

Big swings in wind direction and speed, resulted in the Bareboat Charter A and B classes, changing places during the races. Eventually the Chinese on Zhang Jiajun's Oceanis 45 Beiyi Fund Asia Pacific Sailing (Gloria) came out on top in the Bareboat Charter A class, but were not on their own, as their counterparts Xu Xingpang's sister ship Oceanis 45 Megan matched them with five points. The Russians on Aleksei Brunov's Oceanis 45 Moonshine are only one point adrift in 3rd overall and happy with the opening rounds.

Different story in the Bareboat Charter B class, with the Japanese on Toshihiko Iijima's Hippocrates (SARIYA) posting two wins by a healthy margin and lead the class. The Russians Igor Ginzburg's Sun Odyssey 409 INLOVA followed suite with two 2nd places and eager to defend the title. Fourth and 3rd for the Russian counterparts on Musikhin Serge's Hanse 385 Iyarada slots them into 3rd place.

Racing continues tomorrow and with the breeze expected to increase in the next few days, all the classes are still open for the taking.