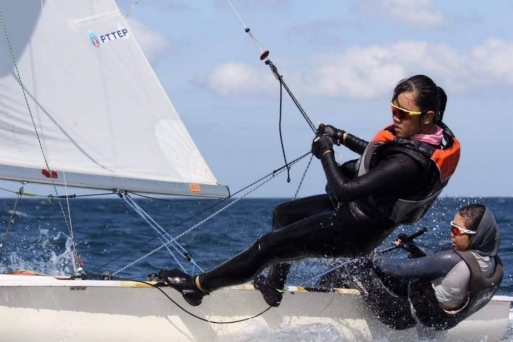 Phuket, 7th December –Conditions were more suitable for water-skiing than sailing on the Andaman Sea off the south-western tip of Phuket on Friday with the lack of wind leaving the large fleet of keelboats and multihulls unable to race.

After being almost becalmed for three hours with little or no wind on a glassy sea, officials sent the keelboats and multihulls back to shore and cancelled the day’s racing in the 11 classes of boats. However, the 107 young sailors contesting the International Dinghy Classes were able to race close to shore off Kata Beach in Phuket in slightly better conditions than the bigger boats experienced further out to sea.

Races are being held in the Optimist Boys and Girls, Laser 4.7, Laser Radial, Laser Standard and 420 classes.

Once again, young Thai champion Panwa Boonak left the field in his wake and leads the overall standings in the Boys Optimist Class. Panwa, who won the 2018 Optimist Asian & Oceanian Championship at the Ngwe Saung Yacht Club & Resort in Myanmar, is way out in front after winning all 10 races held so far in the class.

In second place is promising young sailor M.L. Weka Bhanubandh, a future star in the making, and he is followed by Patihan Vorrasart in third place.

Janisara Sasha Romanyk has the lead in the Laser Radial Class, with Sophia Gail Montgomery second and Voravong Rachrattanaruk third.

Pitchakon Ungpakornkaew was the overall leader in the Laser 4.7 Class and he was followed by Patcharee Sringam in second place, with Nuttapong Yoang-Ngam bringing up third place.

The final day’s racing in the 32nd Phuket King’s Cup Regatta will be held on Saturday. H.E. Air Chief Marshal Chalit Pukbhasuk, the Personal Representative of His Majesty the King of Thailand, will preside over the Royal Award Ceremony which will be followed by the closing ceremony and prize-giving.