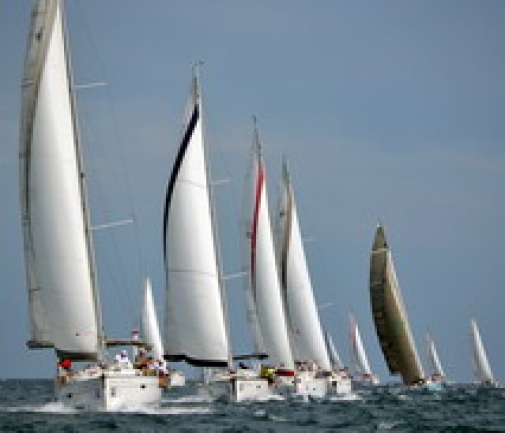 6th December 2017: Despite the weather forecast predicting the brisk morning breeze to slow down, this was not the case, as crews made their way out to the race course. By start time 18 to 20 knots, tending from the East South East, with the highest gusts reaching 26 knots, produced some fast and furious racing. Two coastal races for the cruising classes and up to three windward/leeward races for the racing classes, that made it through the day. Ultimately the damage rate increased and many retirements with broken equipment, one dismasting and bruised egos were recorded, which brings the regatta to a conclusion for the irrepairable cases. With the lay day looming tomorrow, a well earned rest for some, while others will be making hurried repairs to continue through to Saturday. For those that can remember back to the early King's Cup's, and the Andaman Sea Race from Phi Phi to Nai Harn, will describe today's conditions as classic.

Once again Kevin Whitcraft's TP52 THA 72, whipped up a frenzy and continued their winning streak, with three more IRC 0 wins, making it 8 in a row, to put themselves in an unbeatable position, with two days of racing to go. Jaray Tipsuk, helmsman on THA 72 "Our team is very ready following an exhaustive practice schedule at similar speeds. We’re fast reaching downwind, and our techs have really concentrated on in-depth briefings, on how we can improve, so everything is well planned and well drilled."

Just as Japan's Yasuo Nanamori's Beneteau 40.7 Karasu, were getting back in the game, disaster struck with equipment failure, that forced them to retire from the last two races and drops them down to 4th overall. Being on the boil all week, Fred Kinmonth / Nick Burns Sydney GTS 43 Otonomos Mandrake IIIscored two wins, plus survived a protest hearing for 3rd place and take over the IRC 1 lead, with a healthy 4 point margin over Mati Sepp's chartered Swan 42 Club Loco, that has been threatening all week.

A well earned win for Yan Yuye's A 40 RC Shenzhen Seawolf advances them into 6th overall, as the unfortunate dismasting of Scott Bradley's Sydney 40 Emagine plunges them down the order. It's as if the stiff breeze is made for Peter Sorensen's Farr 40 Ramrod, as they become the biggest mover into 5th overall, after a indifferent start. With Karasu's demise, David Fuller's chartered Beneteau 44.7 Fujin jumps up into 3rd overall but will rely on something untoward happening to the leaders to make any further gains.

The Premier Cruising class continued with island passage racing, that suit the monsters style of racing, in these conditions. After 3 1/2 hours of racing, Geoff Hill's Smith 72 Antipodes claimed the daily double and although their elapsed time was over 30 minutes in front of triple defending champion, Thailand's Ithinai Yingsiri's X55 Pine-Pacific, it was reduced to 2 1/2 minutes on corrected time. Fabio Becattini's A80 Apsaras crossed the finish line in 2nd place but were reduced to 4th place, as former Whitbread racer Gijs van Liebergen's King's Legend corrected out with 3rd place to hold third overall, behind the dueling leaders, who are separated by only one point.

With the first day collision behind them, John Newnham's Twin Sharksand the port bow patched up, have made up for lost races and by scoring four wins since their return, have reclaimed top spot in the Firefly 850 Sport class. As damage to Ray Waldron's Surf Patrol put them out of the regatta, it must be noted that John Newnham offered his boat to Ray Waldron's crew to continue, but the kind offer was declined. Severe shuffling of places has reduced Hans Rahmann's Voodoo to second overall, as Japan's Natsuki Motoyoshi's Mil Grace / Frog survived a near catastrophic nose dive and finished without spinnaker, to settle on 3rd overall.

All four Pulse 600 One Design trimaran's suffered some damage today. As Mick Tilden's Pixalux /Java claimed the first race, in front of Andy Pape's Multihull Solutions H30 they end up tied on 10 points and share top spot in the pointscore. Liz Schoch's Sudu Yellow and Neil Ayre's Java Yachting retired from the first race, then Tilden's Pixalux /Java and Pape's Multihull Solutions H30 came to grief in the second race and no one recorded a finish.

Henry Kaye's Seacart 30 Thor, thrives in these fresh conditions and eight wins in a row leaves little doubt, who will claim the Multihull Racing title this year. Although Mick Coleman's Stealth 11.8 Asia Catamarans Java retired from the second race but has consistently scored 2nd places, to keep them in 2nd overall. New this year, Bob Garner's Daim 24 Blade Runner IX and by holding it all together plus scoring a string of 3rd places and 2nd in the last race today, are in 3rd overall, on their first outing in anger.

Two wins for Mikhail Beloborodov's Sunsail 404 Thisara is a huge improvement and as the drop race comes into play, plus other yacht placing's are up and down the order, only one point separates 2nd to 5th place and all to play for in the podium race. Both Grant Horsfield's Fountaine Pajot 67 Arabella and Zhang Yong Dong's Andaman Cabriolet Big Boys Racing 2 (Da Vinci) scored 2nd places and drop their worst score today, to end up tied on 11 points and fighting over 2nd overall. Although Rick Fielding's Mojo Multihull Solutions could only manage two 3rd places today, they still lead the Multihull Cruising class by 3 points but cannot afford any slip ups in the coming days.

Another win and dropping 3rd place, the Russian's on Igor Ginzburg's Sun Odyssey 409 Phailin, have never finished worse than 3rd place, extend their lead in the 14 strong Bareboat Charter class. Also scoring a win in the first race, Yury Kharazyan's Bavaria 45 Tonicola 2 stays in 2nd overall, while two 2nd places for Vladimir Oleynikov's Sun Odyssey 409 Ratana advances them into 3rd overall. USA's Jim Johnstone'sSailing In was over the start line and by not returning, drops them like a hot potato to 6th overall.

By hammering home two victories, the Chinese on Xiong Ting's Standfast 40Mermaid (Mas Allegre) regain the lead in the Modern Classic class, in their own right. Two 2nd places for Andrey Novoderezhkin's Bavaria 39 Sea Escapes, reduces them to 2nd overall but only 2 points from the lead. Two 3rd places for Jan Willem Doeksen's chartered Tartan 48 Emerald Blue keeps them in 3rd overall but difficult to catch the leaders.

Although Urii Firsov's IOR Farr 43 Uminoko scored 6th place in the first race, to become their drop race, they rebounded with victory in the second race, to extend their lead in the 8 yacht Cruising Class. With a 3, 4 score line, Bob Howison's Elan Impression 434 Kinabalu holds onto 2nd overall but slipping further behind the leader. First and 3rd place for Jianquan Tong's ketch rigged Slipper 42 Atom elevates them into 3rd overall, while two 2nd places for Chris Mitchell's Naut 40 Lady Bubbly is enough to move into 4th overall and relegate the Aussie's on Tristram Denyer's Bavaria 37 Iseulta down to 5th place. 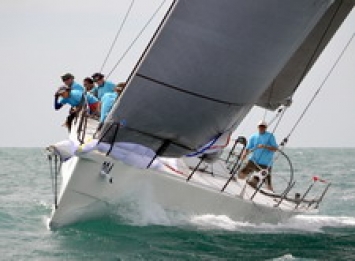 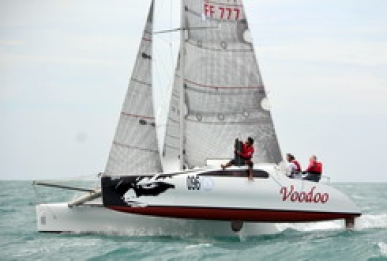 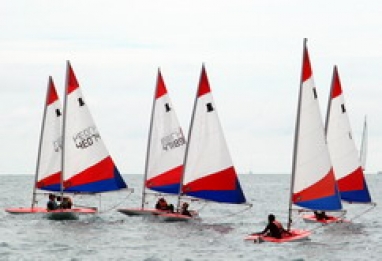 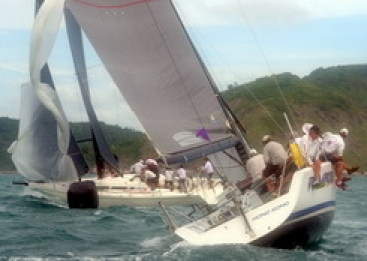 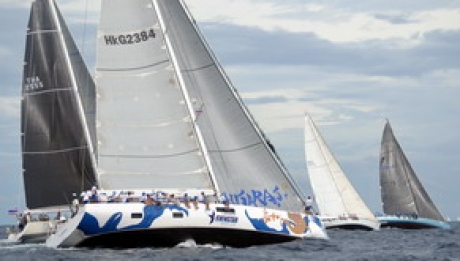 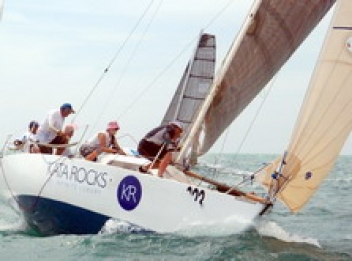 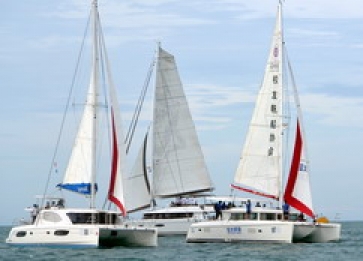 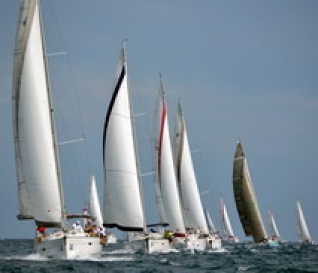 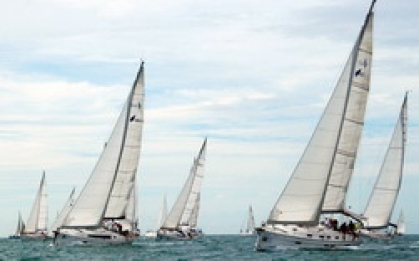 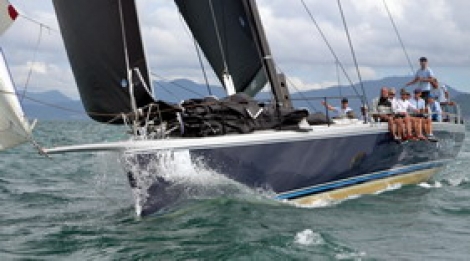