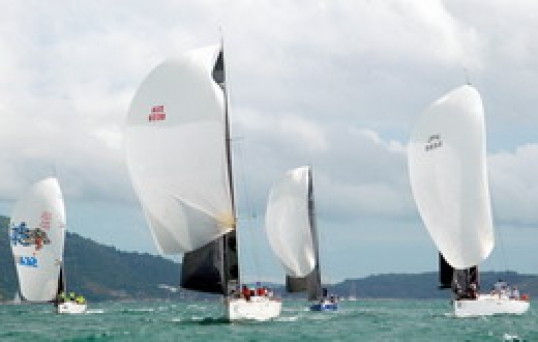 5th December 2017: As the low pressure system is rapidly moving to the North West and deeper into the Bay of Bengal towards India, the Easterly flow is beginning to fade away in Phuket and the sky is very overcast, with scattered showers on the horizon. South island courses for the Cruising Classes and one windward / leeward race, followed by a lengthy island course for the racing classes, has the race schedule on track, with some races in hand. Racing started in 14 to 18 knot Easterly but faded through the day, as yachts struggled to reach the turning points, in the strong out going tidal current. As these conditions are likely to continue for the next couple of days, Race Director and PRO Simon James will have to play his lucky cards, to complete the schedule, before the NE tradewind is predicted to return by the weekend.

This didn't stop Kevin Whitcraft's TP52 THA 72, from continuing on their winning ways, with their flawless performance and by posting two more wins, are well on the way to defending the IRC 0 racing title. Two 2nd places for Ray Roberts TP52 Team Hollywood, confirms 2nd overall but will have to pull the rabbit out of the hat, to matchTHA 72 speed and preparedness. Once again Phillip Turner's canting keel Reichel/Pugh 66 Alive skippered by Duncan Hine raced off into the distance for line honours and this time managed to score two 3rd places and relegated Sarab Singh's Welbourn 52 Windsikher II two 4th places, to become tied on 17 points and fighting over third place on the podium.

After yesterdays disqualification Japan's Yasuo Nanamori's Beneteau 40.7 Karasu, rebounded by winning the first race and 4th on the long race, plus as the drop race comes into play, have reasserted themselves at the top of the IRC 1 pointscore, but cannot afford any more slip ups. Two 2nd places for Mati Sepp's chartered Swan 42 Club Loco and dropping 4th place, are tied with Karasu on 7 points for the lead. Victory on the long race for Fred Kinmonth/Nick Burns Sydney GTS 43 Otonomos Mandrake III are only one point behind in 3rd place and turning the nine yacht class into a three horse race.

Despite dipping to 2nd place on the windward/leeward race, Peter Dyer's IOR 3/4 ton Kata Rocks - Madam Butterfly, rebounded by winning the long race and still hold a commanding lead the IRC 2 class. China's Shen Sheng's Farr 1104 Big Boys Racing (Farrgo Express) came good to win the first race and despite scoring 3rd place on the long race, take over 2nd overall in their own right. Although Brian Smith's J 130 Jing Jing did some spinnaker trawling and retired from the first race, they finished with 2nd place on the long race and are now tied with James Downard's Farr 1104 Krabi Boat Lagoon Piccolo for 3rd overall.

A battle of the heavyweights is looming in the Premier Cruising class. Yesterday Geoff Hill's Smith 72 Antipodes claimed the honours but the triple defending champion, Thailand's Ithinai Yingsiri's X55 Pine-Pacific struck back today by winning the only race and take over the lead. The score is now tied on 3 points with Antipodes and likely to go down to the wire. Former Whitbread racer Gijs van Liebergen's King's Legend showed good form for 3rd place, in front of the bigger opponents Fabio Becattini's A80 Apsaras and Paul Blakeley's Swan 90 Spirit retiring from the race.

After retiring with a damaged bow yesterday, John Newnham's Twin Sharks, were back on form today and by winning two Firefly 850 Sportraces, climbs up to be tied with Japan's Natsuki Motoyoshi's Mil Grace / Frog for 2nd overall. Despite seriously shuffling the places, Hans Rahmann's Voodoo still holds the overall lead, but will have to go like a bat out of hell to stay there.

By trading 1st and 2nd places, Andy Pape's Multihull Solutions H30 and Mick Tilden's Pixalux /Java remain tied on 6 points and fighting over the Pulse 600 One Design title. Two 3rd places for Liz Schoch's Sudu Yellowkeeps them in 3rd overall, while the set back yesterday for Neil Ayre's Java Yachting may have bruised their confidence, as two 4th places leaves them trailing at the back of the pack.

Two more daily doubles for Henry Kaye's Seacart 30 Thor, keeps a clean score sheet and completely dominates the Multihull Racing Class. Mick Coleman's Stealth 11.8 Asia Catamarans Java is the only multihull that is able to come anywhere near beating Thor, but a string of 2nd places has them playing the bridesmaid role. Despite Bob Garner's Daim 24 Blade Runner IX limping off in 6th place on the long race, they still hold onto 3rd overall.

Despite starting late after a big night in Patong, Grant Horsfield's Fountaine Pajot 67 Arabella, came through the fleet to notch up their first victory. Second place for Japan's Kimiya Shimizu's Leopard 444 Pin-On and another 3rd place for Zhang Yong Dong's Andaman Cabriolet Big Boys Racing 2 (Da Vinci) has all three boats tied on 9 points and filling 2nd through to 4th places. After posting two 1st places yesterday, Rick Fielding's Mojo Multihull Solutions could only manage 4th today but still holds the overall lead by 3 points, in the Multihull Cruising class.

Another win for the Russian's on Igor Ginzburg's Sun Odyssey 409 Phailin, extends their lead in the Bareboat Charter class. Second place for Andrey Novikov's Oceanis 40 Alexa, advances them to 5th overall. Slotting into 3rd place, Yury Kharazyan's Bavaria 45 Tonicola 2 stays in 2nd overall, while 4th place for Vladimir Oleynikov's Sun Odyssey 409 Ratana allows them to leap frog USA's Jim Johnstone's Sailing In for 3rd and 4th overall respectively. Although the 14 strong class is the biggest fleet racing, the top five yachts have scored all the podium places.

Victory for Andrey Novoderezhkin's Bavaria 39 Sea Escapes, lifts them into the lead in the Modern Classic class. Second place for the Chinese on Xiong Ting's Standfast 40 Mermaid (Mas Allegre) ties them on 6 points, with the same score line as the leader but reduced to 2nd overall. Although Toshiyuki Kawaguchi's Aussie Girl (Sariya) scored 3rd place and Thailand's Ket Mangklaseranee's Sea Hub Marigold scored 4th place, they languish back in the order. While Jan Willem Doeksen's ketch rigged Tartan 48 Emerald Blue found it hard going in the light breeze and pulled up in 5th place, they still hold onto 3rd overall but is 9 points shy the dueling leaders.

Another convincing win for Urii Firsov's IOR Farr 43 Uminoko extends their lead in the 8 yacht Cruising Class. Bob Howison's Elan Impression 434 Kinabalu were over the start line and recalled, but they worked their way back into 5th place, which is enough to hold onto 2nd overall. Second place for Jianquan Tong's ketch rigged Slipper 42 Atom is an improvement into 4th overall, while third place for the Aussie's on Tristram Denyer's Bavaria 37 Iseulta keeps them in 3rd overall, and starting to see some points separation for the front runners. 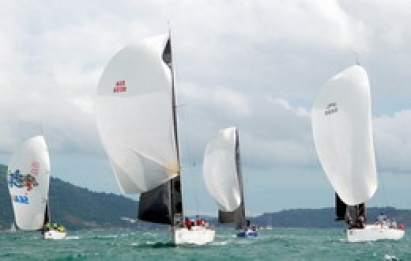 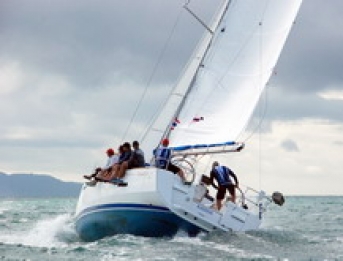 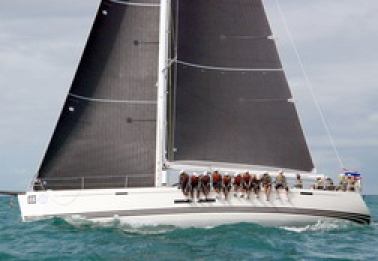 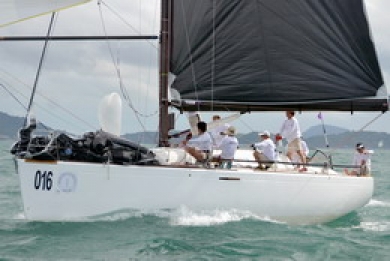 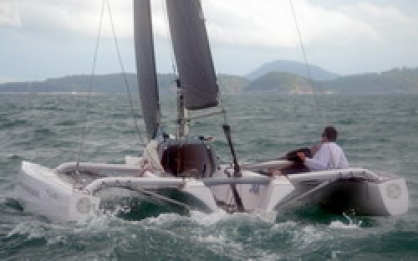 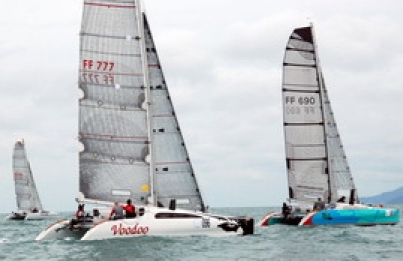 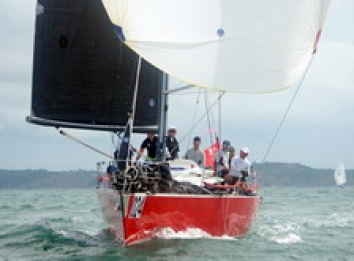