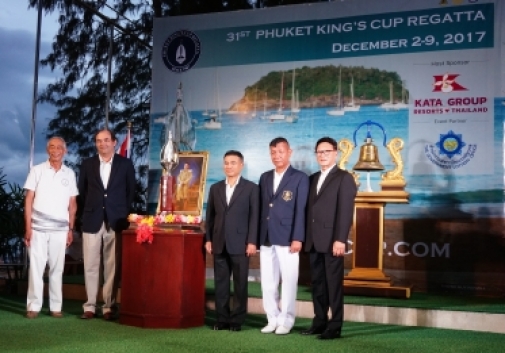 Bangkok/Phuket, 3 December, 2017–The Opening Ceremony of the 2017 Phuket King’s Cup Regatta hosted at Beyond Resort Kata hoists the flag on this year’s race and honors a strong fleet of entries. Over 100 keelboats, multihulls and dinghies from around the world have joined the 31st Anniversary race. The ‘17 Regatta reaffirms the reputation of Phuket as a sports and marine tourism paradise, and also contributes to the future of sailing in Thailand. This year’s race has a particularly strong focus on growing the sport of Youth Sailing in Thailand and building a great sailing future for the country.

Norapat Plodthong, Phuket Governor, spoke of the importance of the Phuket King’s Cup Regatta for the island of Phuket: “This prestigious sporting event reaffirms the reputation of Phuket Island as a Mecca for marine and sports tourism. We are also proud of our island’s reputation for offering world-class hospitality services for visiting guests. We continue to grow in stature as one of the world’s best destinations for watersports, yachting and competitive sailing”.

Kevin Whitcraft, President of the Phuket King’s Cup Regatta Organizing Committee, says, “The 31st Phuket King’s Cup Regatta features a grand fleet of Keelboats, Multihulls and International Dinghy races. It’s great to see familiar names and faces returning year after year to compete in what has become Asia’s most coveted yachting trophy. The Regatta endures as a big attraction for sailing teams from around the world; this year’s race has successfully received strong fleet entries from over 100 competitive teams. We are now positioning the race so that it remains highly relevant to future generations and the ongoing development of the sport”.

The Phuket King’s Cup Regatta welcomes the return of some familiar teams and boats which have already proven their pace, pedigree and performance in regattas past. Ray Roberts’ Team Hollywood and Sarab Singh’s Windsiker are to head up IRC0. Team Mandrake, which has dominated in previous years, will go up against a highly charged pack consisting of Karasu (JPN) and Madame Butterfly (GBR), whilst Premier class sees the return of the pace-setting Pine-Pacific (THA) team. Both the Bareboat Charter and Cruising classes comprise large fleets, and the Cruising Multihull fleet continues to grow. A smaller but ever-more-tightly competitive Firefly 850 grouping features familiar names Twin Sharks and Voodoo, whilst the One-Design class this year runs with the Pulse 600 design.

“For 2017, we have a special focus on growing the dinghy components of our overall regatta, as we in the sailing community in Thailand can feel the positive effect this is having over the years as the sport of sailing continues to grow in popularity here”, says Kevin. “The International Dinghy fleet is a fast-growing racing program designed to promote and encourage youth sailing in Thailand. The program continues to be highly successful in furthering the sustainable growth of the Thai marine industry in the years to come. Many of the young sailors competing will go on to join the crews of full-size keelboat racing teams, and compete in the larger Phuket King’s Cup Regatta in future regatta years”, Kevin notes.

The International Dinghy racing is sponsored by the Government Lottery Office and is divided into the following classes: Optimist Boy & Girl, Laser 4.7, Laser Radial, Laser Standard and Topper.

“OurRace Management and opening and closing events are held at the refreshed and rebranded Beyond Resort Kata, reflecting the more modern, agile and accessible changing face of this legendary race. We would like to thank Kata Group, the Government Lottery Office and Haad Thip PCL for their kind and enduring sponsorship and support”, he concludes.

Chairman of Kata Group Resorts Pramookpisitt Achariyachaisaid, “This year, we have just rebranded our property which has been host venue of Phuket Kings’ Cup Regatta for over 18 years to become Beyond Resort Kata, a luxury resort with the “Sense of Sea” concept. This major revision has been done with the goal of completely upgrading the facilities, including everything from the guestrooms to the resort landscaping. We have a perfect location directly on the famous Kata Beach, and the resort has always been a great destination for families, couples, and groups of friends. We are pleased to welcome all sailors and visitors from the “Phuket King’s Cup Regatta“

High-resolution images for media are available upon log-in. 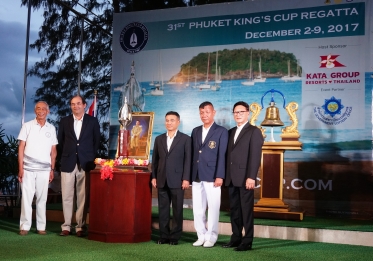