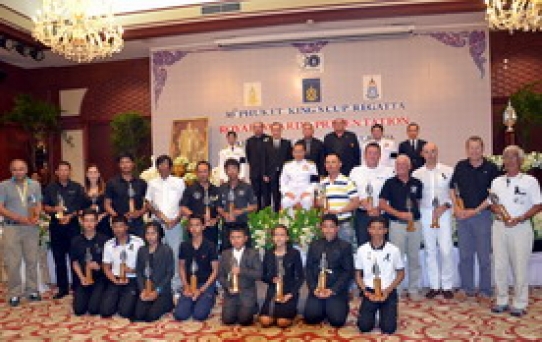 10th December 2016: After two hours waiting for the wind to increase and settle in direction, racing finally got underway in a light 5 to 7 knots Northerly. The final race did not produce any thrills and spills, like the first two days but will be remembered for the contrasting spinnaker colours, clear blue sky and sparkling sea back drop, as the yachts circulated on a tight windward / leeward course. Expectations were high as many skippers wanted to make that one last leap for glory but in most cases the conditions prevented it from happening. The strong current also played a part in judging lay lines and produced crowded mark rounding's that interrupted proceedings. Goto AY Photo Gallery

President of the King's Cup organising committee Kevin Whitcraft, has always preformed well at past regattas and this year is no exception, as they came fully prepared with the latest TP52 THA 72. By winning seven of the eight match racing duels, against the formidable Ray Roberts TP52 Team Hollywood, who have several IRC 0 victories under their belt, is not an easy task. The Whitcraft brothers have won their first Phuket King's Cup in grand style and send a warning to fellow competitors at future events.

Although Steven Manning/Anthony Root's Ker 42 Black Baza and Nick Burns/Fred Kinmonth's Sydney GTS43 Mandrake III put in a stellar performance, scoring 1st and 2nd places in today's light air race, but major damage was inflicted during yesterdays race, that upset the apple cart. Seventh place for Japan's Yasuo Nanamori's Beneteau 40.7 Karasu becomes their drop race and go on to claim the IRC 1 title by two points from Mandrake III. Fourth place for Adam Gosling's Corby 37 Yes! Jessandra II keeps them in third overall and very sporting of them to wait at the finish line and give Karasu a round of applause.

Back on the pace Thailand's Ithinai Yingsiri's X55 Pine-Pacific drove home victory today and in doing so, defended the Premier Cruising class title with a three-peat. The Malaysian Armed Forces Farr 520 Zuhal skippered by Mohd Masyuri, have been pushing the boundaries all week and second place today, elevates them into second overall. Better suited to strong wind, Peter Cremers Warwick 75 Shahtoosh slipped to third overall in the light air race and must be commended for maneuvering the big boat around smaller yachts on tight courses. The Chinese Eastfan Sailing Club (Ningbo) on Baby Tonga put in a sterling effort for fourth overall.

What more can be said about John Newnham's Twin Sharks earth shattering performance. Similar to last year, eight wins in a row to defend the Firefly 850 Sports Class, with a day to spare. Despite interrupting the string of second places with third place today, Hans Rahmann's Voodoo claims second overall and 9 points clear of Japan's Natsuki Motoyoshi's Mil Grace / Frog in third overall.

It's all change in the Multihull Racing class. By winning the last race, Andrew Hurford's Phantom V has displaced Henry Kaye's top performing Seacart 30 Thor at the top of the leader board by half a point. Thor could only manage 4th place today and defeated by the smallest of margins. Third place for Richard Eyre's Morrelli/Melvin 60ft trimaran Rapido keeps them in third overall and a magnificent sight to watch, threading the needle through the crowded fleet.

Despite some severe challenges from the opposition, Neil Ayre's Java managed to overcome them and claimed victory in the Pulse 600 class. At times only yards behind, Florent Herson / Morten Jakobsen's Hanuman XXXIII and Mick Tilden's Pixalux /Javakept up the pressure but finally succumbed to second and third overall respectively.

In the Multihull Cruising class, Norikazu Arai's Lagoon 410 Minnie returned to form today to defend the title. Despite Kimiya Shimizu withdrawing the Moorings 4600 Ying Yangfrom the regatta yesterday, they still hold onto second overall. Fourth place for Niu Huo Huo's Lagoon 420 D&P didn't have the desired result, to take over second overall and has to settle on third instead.

Keeping a clean sheet with seven wins in a row, CPO.1 Wiwat Poonpat and the Royal Thai Navy 1 have completely dominated the Platu One-Design class and won the title, with one day to spare. Second and third places today, for Peik Astrom's The Wolf and Pascal Radue's The Tiger respectively take the remaining podium places.

By taking the honours today, Tony Oates' Bavaria 390 Kata Rocks 2 (Escape) climbs up into second overall. Second place for Igor Ginzburg's SO 409 Snapdragon is enough to take home the Bareboat Charter class title. Fourth place for Andrey Novikov's Alexa relegates them to third overall after being the early leader.

The Chinese on Jianquan Tong's Slipper 42 Asia Pacific Atom returned to form by winning the final race and secured the Cruising Class title. The only threat were the Russians on Andrey Arbuzov's Oceanis 423 Thalassa but 6th place today leaves them three points adrift of the Chinese. Slipping to 5th place today, keeps Supakit Duangngern's Sunlight 30 Sea Hub (Tong Fah) in third overall and Yury Firsov's Milashka behind them.

With the passing of HM the King, it has been a difficult time for the organising committee. However in respect of the King's honourable sailing achievements 'The show must go on" and we're all glad it did, with all the pomp and ceremony fit for a King. Every aspect of sailing - strong, light and no wind, tested the sailors abilities, patience and boat construction throughout the week. I'm sure that's how the King of Sailing would have liked it to be. As far as the future is concerned, we all hope the King's Cup continues to remember the past King's sailing achievements and the new King adds some touches of his own.