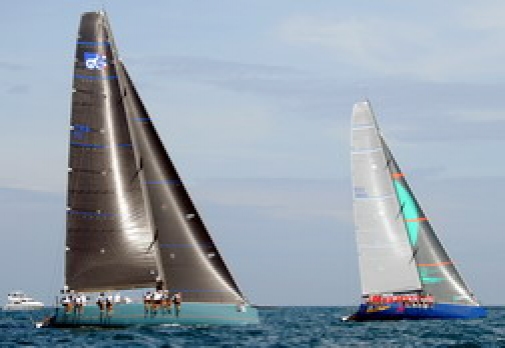 Kevin Whitcraft's TP52 THA 72 led the way, followed by two navy sailing teams and the rest of the fleet including all the dinghy sailors. The Royal salute is a major attraction for the Thai media and a popular show of respect by sailors in remembering the King's achievements. Then it was out to the race course and the brisk breeze for the sail past, markedly declined at the offshore starting area. One passage race around the islands to the SE of Phuket for all classes, become the order of the day.

It was status quo, as the dueling TP52's crossed tacked and weaved their way between the islands, in a dwindling NE'ly breeze. Then it happened, Ray Roberts TP52 Team Hollywood went a little further to sea, found more pressure and passed Kevin Whitcraft's TP52 THA 72. Despite changes in wind direction, on the long downwind leg to the shortened finish line, Team Hollywood held onto the lead and crossed 1 minute 35 seconds in front, to claim their first win of the regatta. This has ruined THA 72 clean sheet but 6 wins in a row will secure them the IRC 0 title.

Despite being quick off the start line and close reaching to the rounding mark,Nick Burns/Fred Kinmonth's Sydney GTS43 Mandrake III were caught offside, when the breeze shifted and increased slightly, as they closed in on the safe water mark. This allowed the trailing fleet to rapidly close in and although they hung on for line honours at the shortened finish line, the damage was already done and finished in 8th place in the handicap stakes. By claiming the win, Japan's Yasuo Nanamori's Beneteau 40.7 Karasuextend their lead in the overall stakes over Mandrake III and third place for Adam Gosling's Corby 37 Yes! Jessandra II ties them on 15 points with Mandrake III and will fight it out for the podium places on the final day tomorrow.

After posting RET, DNC and DNS in the first three races, Niels Degenkolw's X 3/4 TON Phoenix, came good with victory today. Second place for April Jorgensen's Mumm 30 Judy brings them to within one point of the IRC 2 Class leader, Belinda Cooper's First 42s7 Senga as they finished in 4th place. Third place for NC. Poonperm Somrak's Royal Thai Navy 2 is an improvement after a slow start but will need a miracle to overtake Robert Pfeiffer's Farr 1104 Farrgo Express for third overall.

Right from the very start, the Malaysian Armed Forces Farr 520 Zuhal skippered by Mohd Masyuri, weren't playing around and established an early lead, then went on to claim the daily double in the Premier Cruising class. Second place for the Chinese Eastfan Sailing Club (Ningbo) on Baby Tonga brings them to within one point of Zuhal, for the third podium place. Third place for Thailand's Ithinai Yingsiri's X55 Pine-Pacific is their worst result to date but keeps them in the box seat to defend the title. Peter Cremers Warwick 75 Shahtoosh suffered in the patchy light wind and finishing in 4th place, widens the gap to 4 points from the leaders.

Although some confusion reigned on the passing gates and shortened finish line, John Newnham's Twin Sharks came through unscathed, to score their seventh win and defend the Firefly 850 Sports Class, with a day to spare. Seven 2nd places for Hans Rahmann's Voodoo keeps them in second overall and 10 points clear of Japan's Natsuki Motoyoshi's Mil Grace / Frog in third overall.

The lead in the Multihull Racing class also swung back and forth during the race. Eventually Andrew Hurford's Phantom V came through to win the day. Despite being recalled at the start, Henry Kaye's Seacart 30 Thorclawed back to second place and maintain the overall lead by 2 points from Phantom V. Third place for Richard Eyre's Morrelli/Melvin 60ft trimaran Rapido keeps them in third overall and tomorrows results will determine the order of the podium places.

Not finishing yesterday, Neil Ayre's Java returned to form today by winning the race and maintaining top spot in the Pulse 600 class. Second place for Florent Herson / Morten Jakobsen's Hanuman XXXIII keeps them in second overall and need to pull out all the stops, to overtake Java for the title. Third place for Mick Tilden's Pixalux /Java leaves them in third spot and lots of work to do if they are to improve their standing.

In a surprise move today, Kimiya Shimizu's informed the race committee that they were withdrawing the Moorings 4600 Ying Yang from the regatta, as they are returning home to Japan. Despite scoring DNS today, they are still leading the Multihull Cruising class by one point from Japanese counterpart Norikazu Arai's Lagoon 410 Minnie, that could only manage 3rd place today. Niu Huo Huo's Lagoon 420 D&P won the race and in Ying Yang's absence will take over second spot on the podium.

CPO.1 Wiwat Poonpat and the Royal Thai Navy 1 have completely dominated the Platu One-Design class by posting their sixth win in a row and have won the title with one day to spare. By slotting into 2nd place today, Peik Astrom's The Wolf is now tied on 14 points with Pascal Radue's The Tiger and they will be fighting over the remaining podium places.

The Shanghai Sailing Club's Overdrive came good to win the race today, but it comes a little to late in proceedings, to make a difference in the overall standings. Second place for Vladimir Oleynikov's First 47.7 Popeye keeps them on top of the Open Charter class and secure the title, on their first attempt. Third place for David Stoopman's Hanse 400e Kata Rocks Venture gives them a two point buffer, over third placed Brian Smith's Jing Jing.

By taking the honours today, Tony Oates' Bavaria 390 Kata Rocks 2 (Escape)secures 3rd overall but with no wriggle room left. Second place for Igor Ginzburg's SO 409 Snapdragon regains the overall lead in the Bareboat Charter class. Fourth place for Andrey Novikov's Alexa relegates them to second overall and a top score tomorrow, still have a chance at the title.

The Chinese on Jianquan Tong's Slipper 42 Asia Pacific Atom returned to form by winning the race and all but secured the Cruising Class title. The only threat are the Russians on Andrey Arbuzov's Oceanis 423 Thalassa but 6th place today leaves them three points adrift of the Chinese. Slipping to 5th place today keeps Supakit Duangngern's Sunlight 30 Sea Hub (Tong Fah) in third overall but will have to keep an eye over their shoulder, as Yury Firsov's Milashka is only one point behind them.

Tomorrow is the final day of racing and the last chance to improve the standings. This will be followed by the Royal awards ceremony in the ballroom at the Kata Beach Resort & Spa.