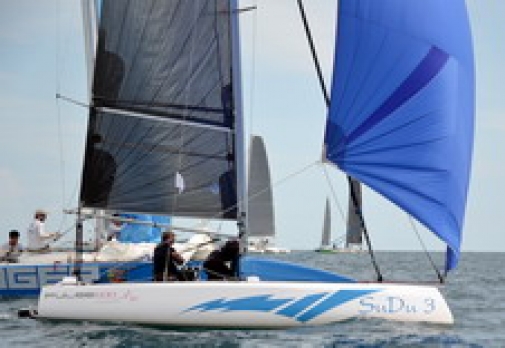 Changes in the air...
By AsianYachting MultiMedia

7th December 2016: After two fantastic days of racing, we knew there was trouble, when the hotel staff were mopping the floor of the outside breakfast area. Looking out to sea, the mirror surface indicated the predicted change had arrived early. At the start line the postponement flag was limp and the two PRO's Ross Chisholm and Simon Jameson separate courses, were scanning the horizon for any sign of wind. Little puffs came and went, from all over the shop, until it settled from 060 degrees and increased to 5 to 7 knots. Almost three and a half hours after the scheduled start time, the dueling TP 52's were released and racing began in earnest. This change in pace benefited the lightweight yachts, with tacticians that picked the best side to go and crews extracting every little bit of boat speed from their ride. Consequently changes in the results, reflect these abilities and big improvements for some mid fleet runners.

Concern about Kevin Whitcraft's TP52 THA 72 light wind performance were put to bed, when they steamed around the course and once again left Ray Roberts TP52 Team Hollywood in their wake. Despite being recalled at the start of the second race, THA 72 still went on to win the race by a smaller margin and notched up their sixth win, to keep a clean score sheet.

An interesting tussle is developing in the IRC 1 class. On the first race, the asymmetric spinnaker yachts of Nick Burns/Fred Kinmonth's Sydney GTS43 Mandrake II and Anthony Root's Ker 42 Black Baza made the most of the light conditions and prevailed over the symmetric spinnakers of Japan's Yasuo Nanamori's Beneteau 40.7 Karasu and Ken Eyears' Sydney 40 MOD Redefine. After a general recall and an individual recall for Mandrake II, they went off on port tack and picked up a favourable wind shift, to claw their way back into third place. UK's Adam Gosling's Corby 37 Yes! Jessandra II came to the fore to win the race and second place for Karasu keeps them at the top of the table and tied on 10 points with Mandrake II, after the drop race is included. The juggling of places brings Yes! Jessandra II back into the game in third overall and Black Baza three points adrift in fourth overall but can't afford any more mid fleet results. Everything is still to play for, on the final two days of racing.

It's all change in the IRC 2 Class. After winning three of the four races held so far, Belinda Cooper's First 42s7 Senga could only manage 7th place in the only race today. But as this result becomes their drop race, they still hold onto top spot on the table. The smaller and lively April Jorgensen's Mumm 30 Judy won the day and NC. Poonperm Somrak's Royal Thai Navy 2 slotted into 2nd place. A dismal 8th place for Robert Pfeiffer's Farr 1104 Farrgo Express becomes their drop race and still hold onto second overall but the field has narrowed to within one point in the overall stakes and can't afford any more bad results.

Thailand's Ithinai Yingsiri's X55 Pine-Pacific slammed home 2nd and 1st places, to promote the defending champion, to the top of the Premier Cruising leader board. In a surprise move, the Chinese Eastfan Sailing Club (Ningbo) won the first race on Baby Tonga and despite taking line honours in both races, the Malaysian Armed Forces Farr 520 Zuhal skippered by Mohd Masyuri, are tied on 12 points and displaced from third overall by Baby Tonga. Peter Cremers heavy displacement Warwick 75 Shahtoosh could only manage 5th and 4th places, to be relegated to second overall and longing for the big breeze to return.

Despite being recalled at the start and trailing the Firefly 850 Sports Class fleet on the first lap, John Newnham's Twin Sharks drove on mercilessly. While others tripped up around the course, they recovered to lead the pack over the finish line. No mistakes in the second race and Newnham's Twin Sharks has won six out of six races and well on the way to defending the title. No matter how much Hans Rahmann's Voodoo huffs and puffs, they have played the bridesmaid role in every race and destined to take second overall. Third place for Japan's Natsuki Motoyoshi's Mil Grace / Frog and while others have scored at least one DNC or DNS, they have secured third overall.

Today the Stealth designs of Andrew Hurford's Phantom V and Peter Wood's Top Cat returned to form and won both races. Second and third places for Henry Kaye's Seacart 30 Thor, keeps them at the top of the Multihull Racing table and never finishing of the podium, could remarkably produce an early 80th birthday present for Cap'n Kaye. By scoring 6th and 4th places, Richard Eyre's Morrelli/Melvin 60ft trimaran Rapido are relegated to third overall and make way for Hurford's Phantom V to take over second place in the standings. This is not over yet and by introducing the drop race, has narrowed in the score lines and one to watch in the coming races.

After some slow starts, Mick Tilden's Pixalux/Java came back from the dead, to win both races today. Confused by rounding the wrong windward change mark, Neil Ayre's Java and Florent Herson / Morten Jakobsen's Hanuman XXXIII scored DNF on the second race, but manage to hold onto 1st and 2nd places in the overall Pulse 600 stakes. Yesterdays collision by Andrew de Bruin / Zam Bevan's H30 Multihull Solutions has ruled them out of any further participation.

Two DNF's in earlier races has not disheartened, Thailand's Sarawut Janthong Angel, as they came good to claim the Multihull Cruising race today. Second place for Japan's Kimiya Shimizu's Moorings 4600 Ying Yang elevates them to the top of the leader board and now tied on six points with Japanese counterpart Norikazu Arai's Lagoon 410 Minnie. These two will fight it out till the end, as they hold a commanding points lead over third placed Niu Huo Huo's Lagoon 420 D&P.

CPO.1 Wiwat Poonpat and the Royal Thai Navy 1 have won many King's Cup trophy's in the past and by posting their fifth win in a row, are likely to add the Platu One-Design to their bulging silverware cabinet. Two 2nd places for Pascal Radue's The Tiger allows them to regain second overall from Peik Astrom's The Wolf. With only two points separating 2nd to 4th placed Mike Downard's SIA Absolute One Design, the battle is on for the remaining podium places.

Brian Smith's J 130 Jing Jing has put an end to Vladimir Oleynikov's First 47.7 Popeye string of victories but doesn't dislodge them from the top of the Open Charter pointscore. Second place for David Stoopman's Hanse 400e Kata Rocks Venture keeps them in second overall but will have to watch out for Jing Jing, as they are only one point adrift of claiming their second spot.

By posting another win, Andrey Novikov's Alexa takes over the lead in the 15 strong Bareboat Charter class. As they discarded an OCS, they cannot afford any more mistakes. Fourth place today for Igor Ginzburg's SO 409 Snapdragon is their worst result, are tied on 10 points with Alexa and waiting in the wings to reclaim the top spot. Despite not starting today, Tony Oates' Bavaria 390 Kata Rocks 2 (Escape) holds onto third overall but risk falling down the order with any more bad results.

Supakit Duangngern's Thai team on his Sunlight 30 Sea Hub (Tong Fah) won today in the face of bigger yachts and rise up to third overall. Although the Chinese on Jianquan Tong's Slipper 42 Asia Pacific Atom could only manage 5th place, they still hold the overall lead in the Cruising Class. Third place for the Russians on Andrey Arbuzov's Oceanis 423 Thalassa keeps them in second overall and rapidly closing in on Asia Pacific Atom for the title.

Tomorrow is the well deserved layday and time for everyone to rethink their strategy. Racing resumes on Friday with the Sail Pass in memory of HM the late King Bhumibol Adulyadej and honour HM King Maha Vajiralongkorn Bodindradebayavarangkunat accession to the throne.