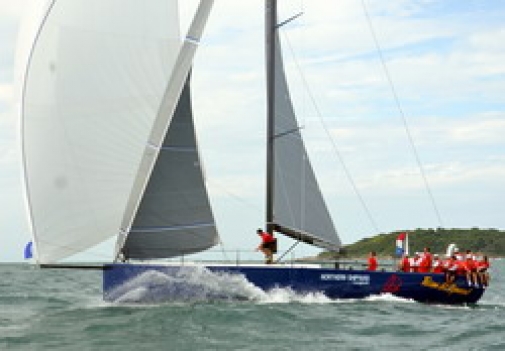 Carnage for some & sleigh ride for others...
By AsianYachting MultiMedia

6th December 2016: Despite the weather forecast predicting a slowdown, the prevailing Easterly never dropped below 12 knots and gusts were recorded up to 25 knots. This had a negative effect on some yachts, while others enjoyed a 'fabulous day of racing' according to Nick Burns. The IRC Racers completed a windward / leeward race and then joined the Cruising Classes on an island race, to the SE of Phuket. Wind against tide produced steep waves, that pounded the yachts upwind and provided a sleigh ride on the long downwind ride to the finish. John Newnham increased Twin Sharks speed record to 27.2 knots, then had some hairy moments in the process and survived to tell the story. A couple of collisions kept the International Jury busy and unfortunately ruined the day for some of the leading contenders.

Kevin Whitcraft's TP52 THA 72 continue to dominate Ray Roberts TP52 Team Hollywood in their heavy air match racing duel. By two minutes on the first race and 10 minutes on the long race, to make it four wins in a row. Things may change as the wind lightens up, but for the time being, they continue at break neck speed and are entertaining the media and spectator boat crews.

During the first race Anthony Root's Ker 42 Black Baza was holed by Andrew de Bruin's out of control Pulse 600 H30 Multihull Solutions and both joined the growing casualty list. Meanwhile Nick Burns/Fred Kinmonth's Sydney GTS43 Mandrake II put in an outstanding performance with an 1, 2 score line to advance into second overall. As the long race did not give any advantage to the symmetric spinnaker yachts, Ben Copley's Ker 40 Gust surfed off into the distance and claimed the daily double. Reducing Japan's Yasuo Nanamori's Beneteau 40.7 Karasu overall points lead and dropping UK's Adam Gosling's Corby 37 Yes! Jessandra II to third overall.

Despite half the Firefly 850 Sports Class retiring with damage yesterday, all six cats were back out on the course today. Talk about nip and tuck between the leading contenders, John Newnham's Twin Sharks and Hans Rahmann's Voodooexchanged the lead several times. It took Newnham's Twin Sharks to accelerate to 27.2 knots, to beat Rahmann's Voodoo by 36 seconds over the finish line and notch up two more wins on the day. Recovering from yesterdays retirement, Shaun Jackson's Kata Rocks III rebounded with two 3rd places and put themselves back in the running for the podium places.

Overnight leader, Danny Moore spent the day repairing his Carbon Custom 36 3Itch damaged back beam and mistakenly thought, they would only miss one race. In their absence, Richard Eyre's Morrelli/Melvin 60ft trimaran Rapido helmed by none other than Pete Melvin, made the most of the tough going to win both races and move up into second overall in the Multihull Racing stakes. Also enjoying the fresh conditions, Henry Kaye's Seacart 30 Thor pedal to the metal attitude, earned them two 2nd places and take over the lead on the scoreboard. Aussie Andrew Hurford's new Phantom V kicked in with two 3rd places and also moves up into third in the overall standings.

With Andrew de Bruin / Zam Bevan's H30 Multihull Solutions retiring damaged after the collision with Black Baza, left the door open for Florent Herson / Morten Jakobsen's Hanuman XXXIII to secure victory and second overall, in the only Pulse 600 race today. Second place for Neil Ayre's Java elevates them to the top of the pointscore and reduces H30 Multihull Solutions to third overall.

Japan's Kimiya Shimizu's Moorings 4600 Ying Yang got the better of Norikazu Arai's defending champion Lagoon 410 Minnie today and are tied on six points, at the top of the Multihull Cruising Class table. Third place for Grant Horsfield's Fountaine Pajot 67 Arabella brings them to within striking distance of third overall, as the Chinese on Niu Huo Huo's Lagoon 420 D&P did not start (DNS) today.

Another win for CPO.1 Wiwat Poonpat, firmly puts the Royal Thai Navy 1 at the top of the Platu One-Design pointscore. Second place for Peik Astrom's The Wolf and the retirement of Pascal Radue's The Tiger, advances them to within one point of second overall, as Mike Downard's SIA Absolute One Design could only manage third place today.

Out of the blue, Andrey Novikov's Alexa came good with victory today and very pleased as they scored OCS on the last race yesterday. Second place for Shkurin Nikolay's Kingsman moves them into third overall, after the Day 1 results have been sorted. Third place for the Russians on Igor Ginzburg's SO 409 Snapdragon keeps them at the top of the 15 strong Bareboat Charter class. Although Tony Oates' Bavaria 390 Kata Rocks 2 (Escape) scored fifth place today, they still manage to hold onto second overall but risk relegation when the drop race is introduced.

Racing continues tomorrow and as the low pressure system moves further into the Bay of Bengal, the prevailing NE-E is predicted to moderate in strength and by tomorrow afternoon a considerable drop off in strength for the rest of the week.