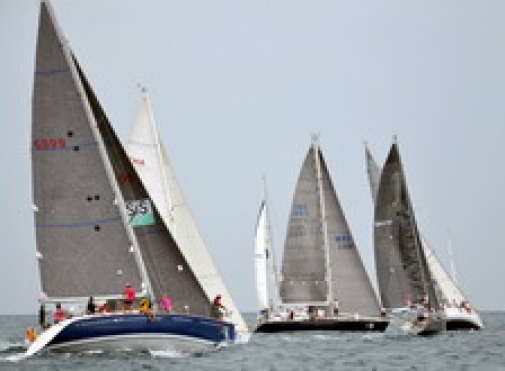 By AsianYachting MultiMedia
5th December 2016: Regatta organizers, local and international sailors joined in 89 seconds of silence to mourn the passing of HM the late King Bhumibol Adulyadej and honour HM King Maha Vajiralongkorn Bodindradebayavarangkunat accession to the throne, at the Opening Ceremony last night. Today it was all out on the water and ready to do what sailors do best. A developing low pressure system, to the North of Sumatra, has generated a blustery 12 to 20 knot NE - Easterly flow across Phuket and skippers were warned to take necessary precaution while racing. The first casualty came on the way to the start, when Mick Coleman / John Coffin's Stealth 11.8 Java dismasted and the attrition rate grew rapidly throughout the day.

Proceedings got underway with some start line jostling between Ray Roberts TP52 Team Hollywood and Kevin Whitcraft's TP52 THA 72. Upwind Whitcraft's THA 72slightly edged ahead and accelerated better downwind in the surfing conditions, to record two bullets and a moral advantage in the strong wind. Ray Roberts is not the type of person to give up and rest assured the crew will be doing everything possible, to extract the extra speed needed to overcome THA 72.

The big Premier Cruising class yachts lining up at the start line and powering up the windward beat is a magnificent sight to behold. Not holding back, Peter Cremers Warwick 75 Shahtoosh and Thailand's Ithinai Yingsiri's defending champion X55 Pine-Pacific traded first and second places, to be tied on points and in the respective overall places on the leaderboard. The Malaysian Armed Forces Farr 520 Zuhal skippered by Mohd Masyuri were in the mix and ended with two 3rd places for third overall.

The Multihull Classes turned into a demolition derby with some dismasting's and equipment failures.

Despite two second row starts, Danny Moore quickly fired up the Carbon Custom 36 3Itch, to clinch 1st and 2nd places and sit on the top of the Multihull Racing leaderboard. Henry Kaye unleashed his nippy Seacart 30 Thor into a cloud of spray, to claim the second race and 2nd overall. Kirill Stashevskiy ducked and weaved around the big trimaran's to claim 3rd overall for his Stealth 13m Galeforce.

Japan's Norikazu Arai's defending champion Lagoon 410 Minnie is back on the pace and scoring 2nd and two wins, is once again leading the Multihull Cruising Class. Also from Japan, Kimiya Shimizu's Moorings 4600 Ying Yang is following the masters footsteps in second overall. The Chinese on Niu Huo Huo's Lagoon 420 D&P don't want to be left behind and three 3rd places keeps the pressure on the leaders.

As expected in the Platu One-Design class, the racing was close and the results don't belie the time difference. Two wins for CPO.1 Wiwat Poonpat, firmly put the Royal Thai Navy 1 at the top of the table. Mike Downard's SIA Absolute One Design and Pascal Radue's The Tiger traded 4th and 2nd places to be tied on six points and second and third overall respectively, in the process.

The Russians on Igor Ginzburg's SO 409 Snapdragon have kept a clean nose to lead the 15 strong Bareboat Charter class. Tony Oates' Bavaria 390 Kata Rocks 2 (Escape) claimed the first race and hold onto 2nd place. Yury Kharazyan's Bavaria 45 Tonicola 2 has been provisionally awarded third overall but calculations show that Musikhin Sergei's SO 409 Anchali may step up into the breach.

Last but not least, the Chinese on Jianquan Tong's Slipper 42 Asia Pacific Atom have catapulted into the lead in the Cruising Class. The Russians on Andrey Arbuzov's Oceanis 423 Thalassa are hot on their tail in second overall. Despite scoring FPA(6) on the first race, the Aussies on Charlie Robinson's Awatea hold onto third overall.

Racing continues tomorrow and as the low pressure system moves offshore, into the Bay of Bengal, the prevailing NE-E is predicted to moderate in strength and perhaps some sunshine will bring better colour into the images.