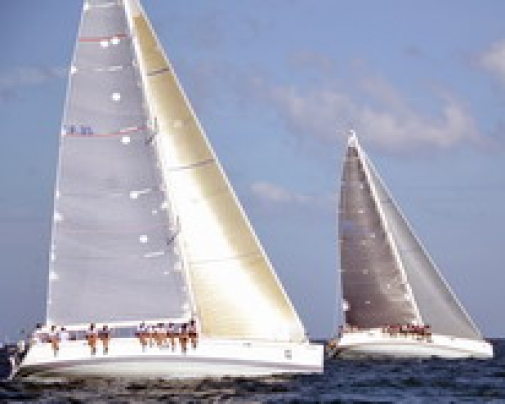 Honouring the King of Sailing
By AsianYachting MultiMedia

4th December 2016: Everyone is deeply saddened by the passing of His Majesty King Bhumibol Adulyadej, the beloved King of Thailand and Royal Patron of the Phuket King's Cup. The loss has been felt around the world, as His Majesty breathed passion and energy into the sport. Although this regatta and prestigious trophy is the last one to be endorsed by Rama 9, the regatta will always honour the legacy of His Majesty and remember his achievements and contributions to sailing. Sailors are asked to respect the current mood and customs while in Thailand by adhering to the recently released Dress Code, at the Opening Ceremony on Sun 4th and Royal Prize Giving Ceremony on Sat 10th. The traditional Sail Pass will be held on Friday 9th.

Ninety six keel boats and multihulls, divided into 12 classes have registered so far. Plus 106 Optimist, Topper and Laser Dinghies, are lining up to contest Asia's premier regatta and expecting a week of fast and furious sailing action. Already the air is full of anticipation and wild speculation, on how the racing will unfold. A low pressure system has formed at sea, to the North of Sumatra and generating a strong NE - Easterly flow across Phuket, over the weekend. As this system moves offshore, into the Bay of Bengal, the prevailing NE-E is predicted to moderate in strength, as the week goes on.

Unfortunately the withdrawal of Sarab Singh's defending champion Windsikher II, has left the IRC 0 class with only two entries. Ray Roberts TP52 Team Hollywood and Kevin Whitcraft's all conquering TP52 THA will be going head to head, in a winner takes all match racing final.

The class break +-01down has been seesawing for the last couple of days and finally the decision was made to race the ten IRC 1 yachts together. The yachts with bowsprits, Nick Burns/Fred Kinmonth's Sydney GTS43 Mandrake II, Ben Copley's Ker 40 Gust and the

present leaders of the AYGP Rankings, Steve Manning and nthony Root's Ker 42 Black Baza are up against the symmetric spinnaker yachts.

The graceful Premier Cruising class has been rejuvenated, with 8 well prepared yachts, ranging in size from Suwan Poopoksakul's Sleeker 45 Pasaya to Peter Cremers Warwick 75 Shahtoosh. Defending champion, Thailand's Ithinai Yingsiri's Pine-Pacific are aiming to make it a three-peat. Previous winners, Australian Maid and Baby Tonga are under charter to the Chinese Big Boys Sailing Team and the Premier Eastfan Sailing Club (Ningbo) are ready to strike out again. Victory at the Raja Muda Regatta two weeks ago, is just the moral boost the Malaysian Armed Forces Farr 520 Zuhal skippered by Mohd Masyuri needed and would like to follow through with another top performance.

There are 20 yachts entered in the Bareboat & Open Charter classes and seven in the newly formed and highly competitive Platu One Design class.

Much of this regatta is about monohull racing, but the Multihull's are coming out in force by fielding 31 craft in the Racing, Cruising and two highly competitive one-design classes.

All six entries in the one design Firefly 850 Sports Class, are ready for another ding dong battle. While John Newnham's Twin Sharks and arch rival Hans Rahmann's Voodoo have cleaned up in recent years, they will have to keep an eye on George Eddings Blue Noze and Peter Dyer's Kata Rocks III are rapidly improving at every event.

There is a formidable 12 boat line up in the Multihull Racing Class, ranging from Richard Eyre's 60ft trimaran Rapido down to Henry Kaye's nippy Seacart 30 Thor. Using Henry Kaye's Facebook posting for the prediction 'Favourite will be Danny Moore's Carbon Custom 36 3Itch, if the recent modifications hold together. They showed huge potential last time they raced. Rapido and Tantrum might struggle on the short w/l courses! Thor will always be a serious threat! The cat line up will be dominated by the very well sailed, 5 strong competitive Stealth designs. Hurricane is the favorite but Java and Top Gun will be breathing down their necks! Hard to call a class winner! If 3Itch and Thor get away, it will all depend on the handicaps as they both give away quite a few minutes in every hour. For sure there will be pressure on the Race Officer to set some interesting island courses. This is no easy task, as they are up against Alan Carwardine's regatta winning Stealth 11.8 Asia Catamarans Hurricane, that scored 10 bullets last year and set an all time record in the process.'

The growing popularity of cruising catamarans in the region is evident and has produced a racing revival, with eight entries in the Cruising Multihull class, ranging from Japan's Norikazu Arai's defending champion Lagoon 410 Minnie to Grant Horsfield's Fountaine Pajot 67 Arabella.

Six top teams have migrated to the Corsair Pulse 600 One Design class. Heading the field is Phuket Race Week Champions, Mick Tilden's Pixalux, but they will have to get a hurry on, as Neil Ayre's Java, Andrew de Bruin / Zam Bevan's H30 Multihull Solutions and Florent Herson / Morten Jakobsen's Hanuman XXXIII are ready to take them on.

This event is also the fifth point scoring regatta on the annual AsianYachting Grand Prix (AYGP) and competitors expect to improve their overall ranking by the end of the regatta. Ultimately the skipper and yacht with the highest pointscore at the end of the season, is crowned the 2016-17 AYGP Skipper and Yacht of the Year. Check out the 2016-17 AYGP Rankings, by clicking on Skipper - Yacht - Regatta and Scoring System.

Inaugurated in 1987 to mark the 60th birthday of His Majesty King Bhumibol Adulyedej, the regatta is organised by the Phuket King's Cup Regatta Organizing Committee under the auspices of the Royal Varuna Yacht Club, in conjunction with the Yacht Racing Association of Thailand, the Royal Thai Navy and the Province of Phuket. Held each year during the first week of December, the 2016 event is already living up its reputation as the ultimate showcase for Thailand's seafaring heritage.