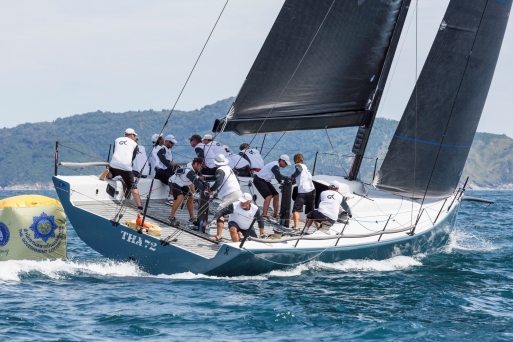 Phuket, 9 December, 2016– The final race day of the Phuket King’s Cup Regatta 30th Anniversary concluded the international sailing competition in a sincere expression of love and respect for HM the late King Bhumibol Adulyadej, and honored His Majesty King Maha Vajiralongkorn Bodindradebayavarangkun. This landmark 30th Anniversary year, under the theme of “A Heritage of Passion,” gave sailors a chance to look back on the long history of successes for the King’s Cup; it also spoke of the future direction of the regatta, with a strong focus on the development of youth sailing and greater connectivity to new and growing sailing markets around the world. The regatta has a very bright future, and thusly the Phuket King’s Cup Regatta Organizing Committee wishes to express its appreciation to all of the sponsors, sailors, partners, media and support crews who have helped it grow over the years into the biggest prize in Asia yachting.

All classes ran just one race today due to light wind conditions in the morning. Ross Chisholm, Race Officer, explains, “On really light days, for the race management it’s about retrieving what we can as best we can, but happily today we ended with a true breeze – it really brought the regatta to a close on a good note. It’s about changing on the fly, for both the race management and for the sailing teams, so it’s all about effective management whichever way you look at it; a bit of patience, a lot of experience. Sailing in light conditions is the real challenge. It separates the men from the boys. Phuket is a characteristically light regatta, so very challenging for sailors, demanding a high work rate and a lot of tactical nous. Even with distant breezes, it was enough to make it happen for everyone.”

CPO.1 Wiwat Poonpat and his Royal Thai Navy 1 have successfully won the Platu One Design class, having come first in all seven races this week. The Royal Thai Navy team performance is particularly poignant given the fact that the 30th Anniversary Phuket King’s Cup Regatta is dedicated to HM the late King Bhumibol Adulyadej. The Royal Thai Navy team are an inspiration for all Thai people, who will take great pride in this magnificent achievement.

Kevin Whitcraft and THA72 have only had Ray Roberts’ boat to battle with this week in a two-boat class. They finished six minutes ahead today on a short sprint course, and are named Regatta winners for IRC0. Japanese team Yasuo Nanamori’s Karasu took IRC1 class regatta victory today, fending off a stern challenge from perennial racers Mandrake III all through the week. They could only manage 7th place today but had done enough on points following three wins earlier in the week.

The 2016 Phuket King’s Cup Regatta competitive classes include Keelboats and Multihulls and International Dinghy Classes. All participants, local and international sailors and organizers, joined in 89 seconds of silenceto mourn the passing of HM the late King Bhumibol Adulyadej at the opening event. 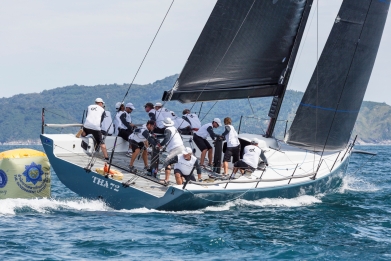